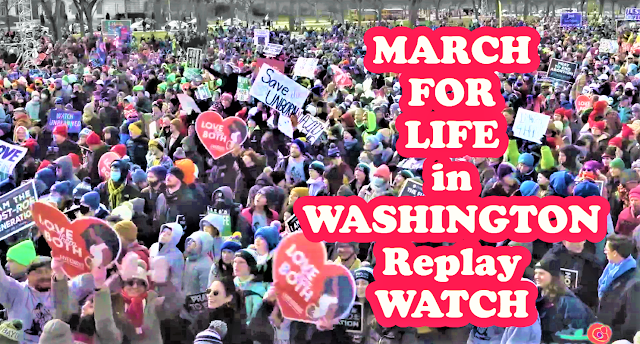 In the United States, hundreds of thousands of pro-lifers came together for the 49th March for Life in Washington, DC, to oppose abortion.

The right to life is a human right. Our defense of that right is a joyful witness to the beauty and dignity of every human person.

WATCH the Replay of the LIVE March for Life 2022 Below:

The March for Life is an inspiring, peaceful, vibrant, and joy-filled rally of women, men, young people, and children from all across the country. Every year, tens of thousands of pro-lifers converge on the National Mall and march on Capitol Hill on the anniversary of the Supreme Court’s 1973 Roe v. Wade ruling which legalized abortion in all 50 states. It’s the largest annual human rights demonstration in the world. But this is not just a protest… TOGETHER, WE GATHER TO CELEBRATE LIFE. We celebrate each and every life, from the moment of conception. We envision a world where every life is celebrated, valued, and protected.

March for Life held a virtual event announcing a unity and diversity theme for the event to support the right to life of of unborn babies. Their theme was announced as 2022 March for Life: Equality Begins in the Womb.Jeanne Mancini, President of March for Life, was joined by a different of leaders from various organizations across the nation to announce this theme.  Each person has critical role to play in building a culture of life. The diversity of unique gifts and talents is truly the strength of the pro-life movement.
Students from Christendom College in Front Royal, VA and Immanuel Lutheran High School in Alexandria, VA carried the banner and flags at the front of this year’s march.
The March for Life also announced that Matthew West, the GMA Dove Award®-winning and GRAMMY Award®-nominated artist/songwriter, performed at this year’s March for Life Rally virtually. Matthew West’s music has inspired and united people from around the world. Matthew West explained, “I am honored to be performing at the March for Life. This is an important event and I look forward to proudly lifting my voice along with thousands of people from all walks of life as we gather together in Washington D.C. and send this message loud and clear: I believe every life deserves a voice. Every child deserves a chance.”Image Source: https://marchforlife.org/With Text Edited from March for Life's Facebook Page - https://www.marchforlife.org/