Wow Brazil Builds Another Statue of Jesus with a Heart that is Larger than its Famous Christ the Redeemer! 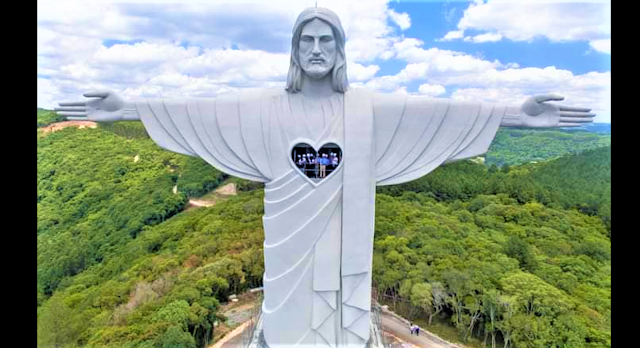 In 2019, construction began on the Cristo Protector and it was erected on the Cerro de las Antenas, near Encantado in the state of Rio Grande do Sul, Brazil. Christ the Protector is 140 feet tall, 16 larger than the Christ the Redeemer in Río de Janeiro.

For the Cristo Protetor de Encantado, the state governor announced, the transfer of R$ 4 million for the paving of the road that connects Lagoa da Garibaldi to the monument.

People can visit inside the statue and take an elevator to the top. The heart of the statue offers majestic views of the area.

This statue was built by faith and inspiration. Many volunteers helped in its building. Brazil is one of the largest Catholic countries in the world with 123 Million Catholics.

Mayor Jonas Calvi gave a special thanks to the governor and state secretaries for the partnership and to the members of the Amigos de Cristo Association for their volunteer work in the construction of the largest monument in the country, in a time of pandemic and without public resources. “This is a historic moment, which shows the strength, commitment and dedication of our enchanted community”, he stressed.

The state secretary of Tourism, Ronaldo Santini, recalled that he was the first representative of the state government to get to know the work of Christ the Protector. “It is one of the most important works of our tourism. The world has turned its eyes to the Taquari Valley”, said Santini, who revealed that, in March 2022, the state government will organize a famtour with travel operators to get to know the Taquari Valley and start marketing tourist attractions with airlines and travel agencies.

“The world turned its eyes to the Valley”, says Santini