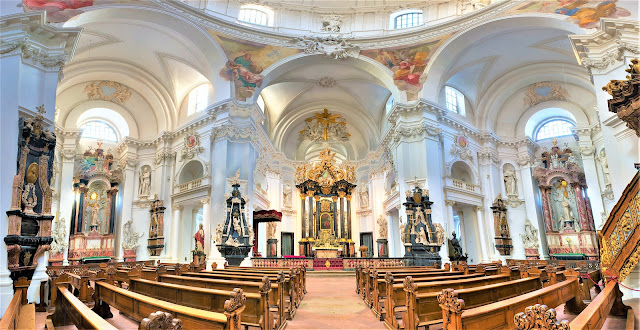 On a high feast day for the diocese, a young man stole a bowl of consecrated hosts from the tabernacle and scattered Eucharist in front of the cathedral. On Friday, February 4th, 2022, the Eucharist was stolen and desecrated in the area of the Fulda Cathedral (Dom), Germany.  A special service of public penance for the act of desecration was held. The cathedral chapter prayed "in front of the tabernacle with prayer, incense and holy water to the Lord for forgiveness."
(SEE 3:15 Mark on Video Below:)
Details: During a service at 10 a.m. (in honor of St. Hrabanus Maurus, abbot of the Fulda monastery), a male person unexpectedly brought an empty paten bowl into the altar room in Fulda Cathedral. Later it was discovered, the bowl had apparently been stolen from the tabernacle before the service and emptied in the area of ​​the cathedral square.
The man was followed when leaving the Fulda Cathedral and was caught by the police a short time later. The diocese of Fulda has filed a criminal complaint. The police are now investigating the suspected disturbance of religious practice and the particularly serious case of theft against the 23-year-old, according to the the Fuldaer Zeitung.

I would like to take this opportunity to address what happened last Friday. I was not present myself because I was in Frankfurt at the Synodal Assembly. In intensive discussions, it became clear that shortly before the Holy Mass for the Rabanus Maurus festival at 10 a.m., a young man entered the sanctuary, opened the tabernacle and stole hosts from it. To our horror, he scattered the communion wafers downtown. They could be picked up and taken back to the cathedral. The police picked up the man and determined his personal details. As a measure, we have agreed that the main celebrant should carry the key to the tabernacle with him and not put it in the tabernacle before Holy Mass.

What happened deeply shocked me and many others.

We have been asked by some people for a liturgical response to this terrible incident. I would like to tell you that I celebrated a private act of penance with the other members of the cathedral chapter in a reconciliation service and prayed to the Lord for forgiveness in front of the tabernacle with prayer, incense and holy water. The desecrated hosts were dissolved in water, as intended, and given to the earth in a special rite.

As a visible sign of penance and reconciliation, these lilies, as a symbol of the three Fulda city saints Simplicius, Faustinus and Beatrix, will stand next to the tabernacle in the next few days and I would like to invite you to hold adoration for a quarter of an hour after this Holy Mass.