Head of the Catholic Church in Ukraine says "...Ukraine is going through the 34th day of this terrible, bloody war that the Russian army brought to the peaceful lands..." 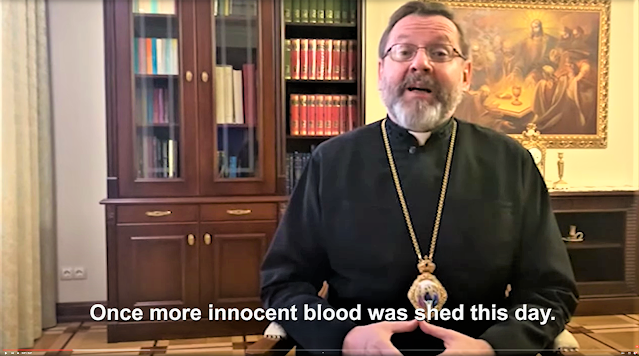 Daily Message from Ukraine's Major Archbishop and Head of the Ukrainian Greek Catholic Church:
Glory to Jesus Christ!
Dear ones in Christ, brothers and sisters! Today is Tuesday, March 29, 2022, and Ukraine is going through the 34th day of this terrible, bloody war that the Russian army brought to the peaceful lands of our Motherland of Ukraine.
Our cities and villages trembled again from the bombs and explosions. Innocent blood was shed again that day.
But Ukraine stands. Ukraine is struggling. Moreover, the Ukrainian army is liberating our cities and villages, and with its courage the Ukrainian people amaze the whole world, with their ability to fight, with their strength the Ukrainian people really feel that this war is a patriotic war, though undesirable, senseless. But we defend and defend our people and our Motherland.
These days we have seen the horror left by the occupier in our towns and villages, especially after their liberation. Destruction, destruction, not only mutilated buildings, but also mutilated human destinies, mutilated bodies of those who were tortured and abused.
Today, the world-famous city of Mariupol continues to defend itself, but it has not been possible to deliver any humanitarian aid to these days. No humanitarian corridors have been opened since yesterday. This means that many people in the surrounding towns and villages had nothing to eat, starved to death, not only from the bullets of the invader.
I receive various voices of weeping and despair, in particular from those who are forcibly deported from Ukrainian soil. We have heard about such violent deportations of residents of the Mariupol suburbs and the occupied quarters of this city. But the same thing is happening in such cities as Maryanka, Volnovakha and other cities and villages of Donbass, cities and villages that have become ghost towns. People are forcibly deported to Russia, their passports confiscated, temporary documents issued and taken to Sakhalin Island, in the Far East of Russia, where they are not allowed to leave their destination for two years. We see that just as entire nations were deported from their land in Stalin's time, the same thing is happening today on Ukrainian soil.
I call on the whole world to stand up for our Ukrainian people in their own way, so that Ukrainians can live on their native Ukrainian land, and no one will enslave them as they have for centuries.
We continue our spiritual Lenten journey. And anyone who tries to fight against sin, with evil, understands that the devil is beginning to threaten and intimidate. The devil wants to do everything to lead man astray from the path of righteousness. Therefore, in order to do good, you need to have courage. In order to follow the path of truth, one must have courage.
Today I want to call on all our listeners, all those who hear the voice of Ukraine, not only in Ukraine but also abroad: Do not be afraid to do good! Do not let the devil intimidate you, lead you astray from the path of Christian and universal righteousness! Today, Russia threatens all those who want to do good to Ukraine. Don't be afraid! Don't be afraid to do good! Do not be afraid to be in solidarity with those who suffer! Because good has its own power, which will always win. Stand close to Ukraine! Make your choice! Do good! Let us overcome the fear of the devil, and he will flee from us, and the truth will shine in all its power and beauty.
God bless Ukraine! God bless the Ukrainian people! God bless the weeping, the weak, the crippled, the deported, the starving. God bless Ukraine!
Source: UGCC https://www.youtube.com/watch?v=5fq_gukbTr0