Head of the Ukraine Catholic Church says "About 44 churches and other religious buildings were destroyed..." and "...Russian rockets and bombs are falling....on the heads of civilians..." 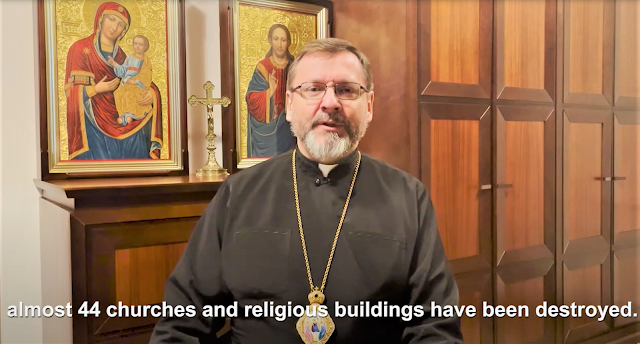 His Beatitude Sviatoslav, Father and Head of the Ukrainian Greek Catholic Church's Daily Message from Ukraine (Image Screenshot from the video):
Sunday, March 20, 2022,
Sacrifice your Divine Liturgy (Holy Mass) in the intention of peace and tranquility in Ukraine, in the intention of the victory of Ukraine and the end of this war! Pray for the victory of peace over war! His Beatitude Sviatoslav, the Father and Head of the Ukrainian Greek Catholic Church, called for this in his daily military address on the 25th day of the Russian war against Ukraine.

The Primate noted that Sunday for Christians is a day at the center of which is the Holy Sacrament of the Eucharist - the Communion of the Body and Blood of our Savior.
In conditions of war, says the bishop, Sunday is experienced in a special way. "In the midst of war, in the midst of this sea of ​​death, for us Christians, the Eucharist is something extremely important. Today we say to ourselves and to the world: without the communion of the Body and Blood of our Savior, we cannot live, we cannot survive in those conditions of war. It is the Sacrament of the Eucharist that gives us this life force to overcome death. The Eucharist is the antidote to death, "he said.


The head of the Church noted that today Russian rockets and bombs are falling from the sky again in different cities and villages of Ukraine on the heads of civilians, believing Christians who seek God.
"We sadly claim that this criminal war is destroying the spiritual shrines of Ukraine. About 44 churches and other religious buildings were destroyed in those 25 days. Surprisingly, most of these churches belong to the Ukrainian Orthodox Church of the Moscow Patriarchate, "the spiritual leader said.
Despite the difficult circumstances, according to him, our military chaplains are celebrating the Liturgy for our army today, feeding the Body and Blood of our Savior, His victory to those who are fighting for the victory of Ukraine. Our priests carry the Body and Blood of our Savior to the cries and groans of the wounded in our military hospitals and go to bomb shelters and dungeons to perform this Holy Sacrament.
The head of the Church expressed gratitude to the Holy Father, who personally visited the Ukrainian children who arrived for treatment at the Baby Jesus Hospital in the Apostolic Capital. He also thanked all the bishops of Europe who receive our refugees and tell the truth about Russia's war against Ukraine.
Source: http://ugcc.ua/en/official/head.ugcc/todays_gospel_echoes_with_hope_god_looks_for_us__his_beatitude_sviatoslav_on_sunday_of_zacchaeus_95610.html