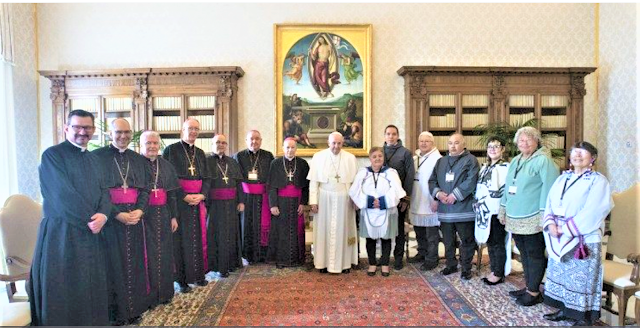 Pope Francis met with Indigenous of Canada; in a historic event at the Vatican, on March 28th, 2022. At the meeting the Pope discussed, with the Indigenous and the delegation, the Church's the residential schools throughout Canada.

They lasted for about 150 years; and approximately 150,000 Indigenous children were taken from their homes to live in these schools. They were often operated by Catholic congregations, and many students became victims of emotional, physical, and sexual abuse. When a discovery of the remains of some children at Canada's largest residential school were found the Pope expressed his sadness, during the Angelus.

This morning, in the course of two successive audiences, Pope Francis met with two groups of representatives of Canadian indigenous peoples, about 10 delegates from the Métis and about 8 from the Inuit, accompanied by some Bishops of the Bishops' Conference of Canada. Each meeting lasted about an hour and was characterized by the Pope's desire to listen and make room for the painful stories brought by the survivors.

The meetings and listening will continue in the coming days according to the information already provided.