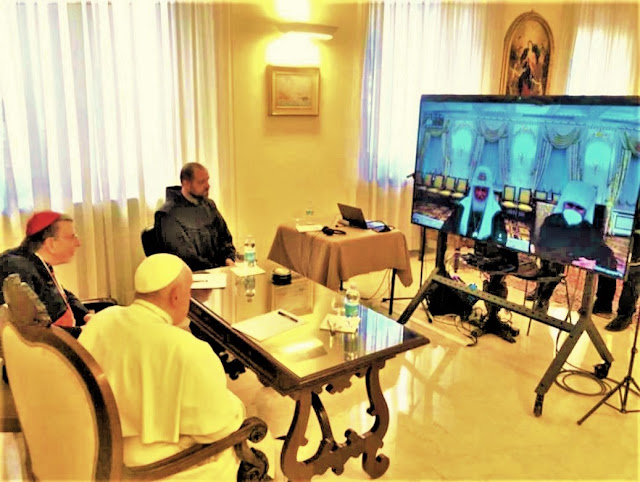 Pope Francis spoke via video call with Russian Orthodox Patriarch Kirill to discuss the war in Ukraine. The Pope calls on Church leaders to use the language of Jesus, not that of politics.
Vatican News reported that in a statement released on March 16, 2022, the Director of the Holy See Press Office, Matteo Bruni, confirmed that a conversation took place in the early afternoon between Pope Francis and Orthodox Patriarch Kirill of Moscow and All Russia.
Mr. Bruni noted that Cardinal Kurt Koch, President of the Pontifical Council for Christian Unity, and Metropolitan Hilarion of Volokolamsk, Head of the External Relations Department of the Moscow Patriarchate, also attended the meeting.
The statement said their conversation focused “on the war in Ukraine and on the role of Christians and their pastors in doing everything to ensure that peace prevails.”
Pope Francis thanked the Patriarch for the meeting, motivated by the desire to point out, as shepherds of their people, a path to peace, to pray for the gift of peace and for a ceasefire.
The Pope said, in agreement with the Patriarch, that "The Church must not use the language of politics, but the language of Jesus.”
Pope Francis added that “we are shepherds of the same Holy People who believe in God, in the Holy Trinity, in the Holy Mother of God: that is why we must unite in the effort to aid peace, to help those who suffer, to seek ways of peace, and to stop the fire.”
Mr. Bruni also said the Pope and the Patriarch stressed the exceptional importance of the ongoing negotiation process, because, according to the Pope, "those who pay the price for war are the people; it is Russian soldiers and common people who are bombed and die."
The statement continued quoting Pope Francis as saying that "as pastors we have the duty to be close to and help all people who are suffering from the war.”
“There was a time, even in our Churches, when people spoke of a holy war or a just war. Today we cannot speak in this manner. A Christian awareness of the importance of peace has developed.”
Pope Francis and Patriarch Kirill agreed that "the Churches are called to contribute to strengthening peace and justice."
Pope Francis concluded the video call, lamenting the cost of war.
“Wars are always unjust, since it is the people of God who pay. Our hearts cannot but weep before the children and women killed, along with all the victims of war. War is never the way. The Spirit that unites us asks us as shepherds to help the peoples who suffer from war.”
The Pope and the Patriarch met in person in Cuba in 2016, signing a joint statement lamenting the conflict in eastern Ukraine:
“We deplore the hostility in Ukraine that has already caused many victims, inflicted innumerable wounds on peaceful inhabitants and thrown society into a deep economic and humanitarian crisis,” they wrote. “We invite all the parts involved in the conflict to prudence, to social solidarity and to action aimed at constructing peace. We invite our Churches in Ukraine to work towards social harmony, to refrain from taking part in the confrontation, and to not support any further development of the conflict.”
The 2016 joint statement went on to call on Christians to pray for an end to war.
“We exhort all Christians and all believers of God to pray fervently to the providential Creator of the world to protect His creation from destruction and not permit a new world war. In order to ensure a solid and enduring peace, specific efforts must be undertaken to rediscover the common values uniting us, based on the Gospel of our Lord Jesus Christ.”
Source: Vatican News