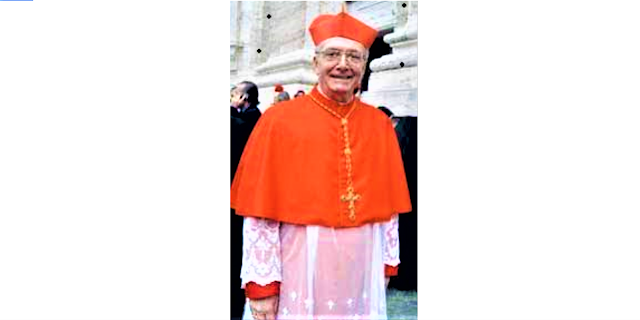 Cardinal Agostino Cacciavillan passed away in the early hours of Saturday, February 5, at his residence in the Vatican.  He was 95 years. The funeral will be celebrated by the Dean of Cardinals, Giovanni Battista Re on Monday, March 7, at the Altar of the Chair in St. Peter's Basilica.  At the end of the Mass, Pope Francis will deliver a farewell speech.
Cardinal Agostino Cacciavillan, President emeritus of the Administration of the Patrimony of the Apostolic See, was born on 14 August 1926 in Novale di Valdagno (Vicenza), Italy. He was ordained for the Diocese of Vicenza on 26 June 1949.
He served as a curate for three years before earning advanced degrees in social science and law and attending the Pontifical Ecclesiastical Academy, Rome. He was later posted to the Philippines, Spain, Portugal and the Secretariat of State.
On 17 January 1976 Pope Paul VI appointed him Apostolic Pro-Nuncio in Kenya and Apostolic Delegate in Seychelles, promoting him to titular Archbishop of Amiternum. He received episcopal ordination on 28 February. Other posts included Apostolic Pro-Nuncio in India (1981) and Pro-Nuncio in Nepal (1985), Apostolic Nuncio in the United States of America and Permanent Observer at the Organization of American States (1990).
On 5 November 1998 he was nominated President of the Administration of the Patrimony of the Apostolic See.
President emeritus of the Administration of the Patrimony of the Apostolic See, 1 October 2002.
He participated in the conclave of April 2005, which elected Pope Benedict XVI.
Created and proclaimed Cardinal by St. John Paul II in the consistory of 21 February 2001, of the Title of Ss. Angeli Custodi a Città Giardino (Holy Guardian Angels at Città Giardino), Deaconry elevated pro hac vice to presbyteral title (21 February 2011).
Cardinal Protodeacon, 1 March 2008- 20 February 2011.
Cardinal Cacciavillan died on 5 march 2022.
Source: https://press.vatican.va/content/salastampa/en/documentation/cardinali_biografie/cardinali_bio_cacciavillan_a.html