Saint March 15 : St. Longinus - the Centurion Converted after Seeing Blood and Water Flow from Jesus' Side on the Cross 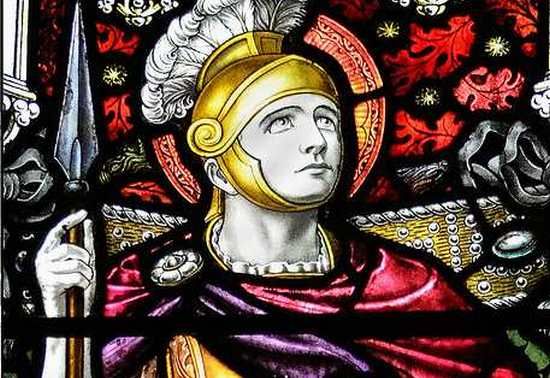 Martyr Longinus, the Centurion who Stood at the Cross of the Lord
He stood transfixed at the foot of the Cross, watching and wondering, full of awe and amazement.  And then all at once, something was born in him – a spark of faith, a brand-new beginning.  And his life was changed forever.
PRAYER TO ST. LONGINUS O Saint Longinus, you were chosen as the venerable gate keeper and was granted the gift of discernment by the Lord. An eyewitness of God's miracle who glorified the resurrected Christ. To your death, you remained Christ's soldier and for Christ you gave your head. Pray for us, therefore, O St. Longinus so that being inspired by your example and assisted by your prayers, we may live a holy life, die a happy death, and reach eternal life to praise and thank God in heaven with you. I ask you to pray to God this special request if it be His holy will. ( Mention your requests ) Our Father Hail Mary Glory Be Almighty, Eternal God, You were pleased to make Your Church illustrious through the varied splendor of St. Longinus. As we venerate his memory, may we also follow such shining examples of virtue on earth and thus obtain merited crowns in Heaven. We ask this through Christ our Lord. Amen. St. Longinus Patron Saint of the blind and people with poor eyesight, Pray for us. St. Longinus Patron Saint of Labor and Power, Pray for us. St. Longinus Patron Saint of Good Discernment, Pray for Us. Amen.
The divine Matthew the Evangelist describes the moment of his conversion to Christianity with enormous power:
So when the centurion and those with him, who were guarding Jesus, saw the earthquake and the things that had happened, they feared greatly, saying, “Truly this was the Son of God!”(Matthew 27:54).
The centurion’s name was Longinus, and he was in command of the Roman soldiers who presided over the Crucifixion of the Lord Jesus Christ on Golgotha.  According to some Church traditions, Longinos was also the centurion who pierced Christ’s side with a spear, in order to confirm his death – after which the wound discharged a rush of blood and water that healed an eye infection which had been troubling Longinos greatly.

Soon after the events at Golgotha, St. Longinus would play a major role in helping to establish the veracity of Christ’s Resurrection . . . after the Jewish elders who had ordered the death of the Holy Redeemer bribed several soldiers to spread the false report that the Savior’s disciples had stolen his body under cover of darkness and made off with it.
St. Longinus ruined their devious plan, however.  Refusing to be bribed, he also insisted on telling the world the true story of how Christ’s body had risen into the glory of the Resurrection.  After learning that the Roman soldier wanted no part of their conspiracy or their money, the Jews decided to rely on their usual ploy: They would simply murder this truth-telling centurion in cold blood.  But the solider was a man of courage and integrity – and as soon as he heard about the plot against him, he took off his military garb, underwent baptism with several fellow-soldiers and then hurried off to Cappadocia, where he spent many hours in prayerful devotion and rigorous fasting.
Responding to the former centurion’s compelling piety, many pagans in the region were also converted to the Gospel and underwent Baptism as a result.  St. Longinus lived and moved among them freely for a time, then eventually returned home to live on his father’s estate. But the perfidious Jews were not finished with him – and their lies soon provoked Pontius Pilate, the Roman governor of Judea under the emperor Tiberius Caesar, to issue a draconian order to his troops: Find this renegade centurion and behead him immediately!
Once again, however, the resourceful St. Longinus anticipated a plan against his life.  Hurrying out to the roadway, he greeted his adversaries as friends.  Without letting them know who he was, he invited them back to his own residence. He fed them lavishly, and when they fell asleep, he prepared himself for his execution by praying throughout the night and then clothing himself in spotlessly white burial garb.  As dawn approached, he drew his loyal companions to his side and instructed them to bury him at the top of a nearby hill.
The stage was now set.  Moving swiftly, the martyr approached the awakening soldiers and revealed his true identity; “I am Longinus, the man you seek!”
Amazed and mortified by their host’s honesty, the Romans were knocked completely off balance – how could they behead a man of such noble character?  But even as they protested against the execution, this greathearted soldier insisted that they should carry out their orders to end his life.  In the end, St. Longinus and the two fellow-soldiers who had stood with him at the foot of the cross were taken to Jerusalem and beheaded, and the centurion’s destiny as a martyr for Jesus Christ was fulfilled.
Sighing mournfully over the tragedy they had been required to act out, the execution squad carried Longinus' head to Pilate, who immediately sent it on to the scheming Jews. They threw it on a dung heap outside Jerusalem.  St. Longinus was dead – but the legends that would follow this valorous warrior had only just been born.
The power of those legends can be seen in another story that has persisted down through the ages.  According to the narrative, a blind woman who was visiting Jerusalem in order to pray at its holy shrines experienced a mysterious dream in which St. Longinus appeared and told her where to find his head, which she should bury.  The blind woman obeyed instantly, and found a guide to lead her to the dung heap.  There she located the saint’s head and reverently transported it back to his native land of Cappadocia for burial.
Source: https://antiochpatriarchate.org/en/page/longinus-the-centurion/1247/