Head of the Catholic Church in Ukraine says "Let's do everything to save human life in Ukraine!" 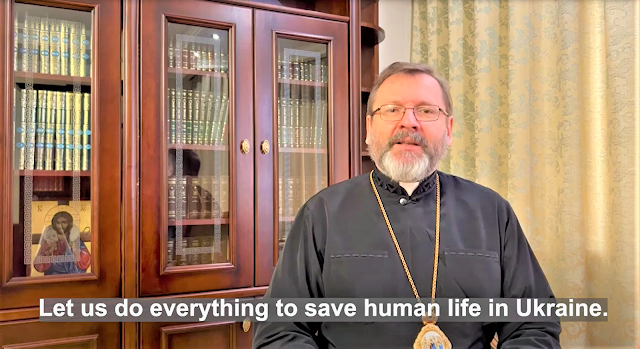 Glory to Jesus Christ!
Dear brothers and sisters in Christ! Today is April 6, 2022. Ukraine is experiencing the sixth week, the 42nd day of this unjust, bloody war waged by Russia against Ukraine.
Our people heroically defend their land. Shows examples of heroism not only by fighting on the battlefield, but also saving lives. That night, the enemy again fired a missile at the most vulnerable elements of the infrastructure of the Ukrainian economy. Several enterprises of the chemical industry were bombed, which caused significant damage to the ecology of those towns and villages. But today we are especially sorry for the lives and fate of the people who found themselves in the temporarily occupied territories.
We know that in the Kherson region, in the south of the Zaporozhye region, food is already running out and there is no possibility to deliver humanitarian goods there.
Ukrainian Mariupol is holding on heroically. Unfortunately, it was not possible to deliver humanitarian aid there again. It is becoming increasingly difficult to evacuate people from those dangerous areas. These humanitarian corridors are constantly under fire. And most people today die during the evacuation.
According to official UN figures, more than 1,500 civilians died in Ukraine during the war. Although we know that the real number is much larger. Many people are missing. Many of them, probably, have also passed away. We were all touched by the story of four-year-old Sasha from Vyshhorod district in Kyiv region, who also died during the evacuation.
Human life during war… What is it worth in the eyes of man? However, in God's eyes it is priceless.
We feel that it is possible to save human life in Ukraine. This is possible not only due to the courage of the defenders of Ukraine of our army, but also due to the position of the international community. Let's do everything to save human life in Ukraine!
May God bless our Ukrainian people. May he save everyone where a human hand cannot touch. In His hands we entrust the lives and health of our people, especially in the war zone and in the occupied territories. God, give Ukraine peace! Stop the war! Bless your children!
The blessing of the Lord be upon you, with His grace and love for man, always, now, and always, and forever and ever. Amen.
Glory to Jesus Christ!