Heartbreaking Damage and Theft at Seminary in Ukraine with Decapitated Statue of Our Lady of Fatima and Chalice Used by St. Pope John Paul II Stolen 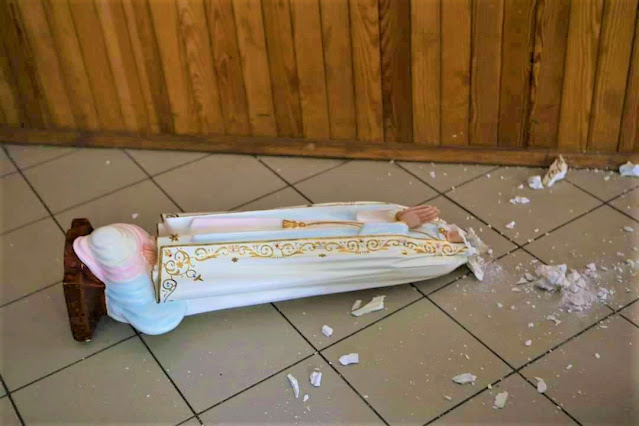 The Catholic seminary in Vorzel, Ukraine, was looting and damaged after it was struck twice by bombs. The rector explained that it was looted by Russian soldiers but also by hungry people from the neighbourhood.

In a report by Salvatore Cernuzio, from Vatican News details emerged from the heartbreaking event:

"The Russian military did this, but also some local people who are desperate, hungry... because everything is closed here, so they came to take food... At least they were able to feed themselves." This, said Father Ruslan Mykhalkiv, is what some Vorzel residents told us. Fr Ruslan is the rector of the Catholic theological seminary of Vorzel, in the Kyiv region, which has been destroyed in two attacks and has been ransacked of everything, from the chalice-relic of John Paul II to the rector's old shoes.

The news of the raid was shared on Facebook by the bishop of the Latin Catholic diocese of Kyiv, Bishop Vitalii Kryvytsky, who also posted some photographs. These show a statue of a decapitated Madonna.

The day after the Russian attack, the rector fled with the seminarians and the residents of a nearby orphanage: two nuns and five children. "We had been preparing for days, aware that something might happen, just as it did". The area was occupied by the army and the group took refuge in a place a few kilometres away, on the road from Kyiv to Bucha, sadly known now for an atrocity described by the Pope as a "massacre" of civilians. Only the spiritual director, Father Igor, who is also the parish priest of the area, remained in the seminary. He stayed even after an attack that smashed windows and destroyed a small guest house next door, until just a few days ago. "They were missiles, or bombs, not big ones. They were launched on the fourth day after the war began. I know because the spiritual director sent us the photos", said Fr Ruslan.

Everything was taken from the seminary. "They stole many liturgical objects and the silver chalice that John Paul II had used in a Mass during his apostolic visit to Ukraine in 2001. For us it was a kind of relic, we used it on important feast days.  The seminarians also had their shoes and clothes stolen.

"We had something to live on, potatoes, pasta, canned goods. There was nothing left,"  the rector said. "And thank goodness," he repeated, "At least we know it was the Russians who looted the seminary because the people we brought food to told us so. ...Now they've taken all the food. It's OK... There was food here and people were hungry. Everything is closed, where could they get things to eat? They had this idea, which may not be exactly according to conscience, but you have to understand the context of the war, of the occupation. They knew they could feed themselves. It's only fair..."