Major Catholic Archbishop of Ukraine says "...we see hundreds of bodies killed..." and "...I call on the whole world: do not take your eyes off Ukraine." 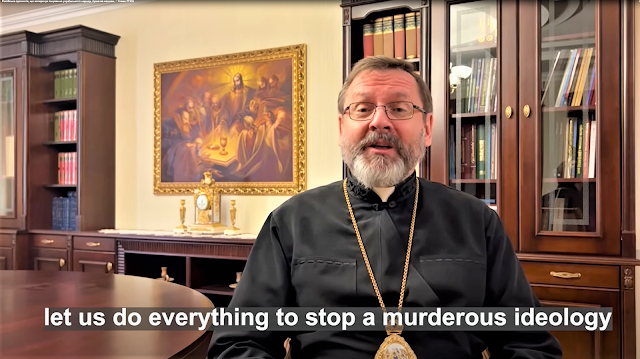 This message of His Beatitude Sviatoslav, Father and Head of the Ukrainian Greek Catholic Church, in his daily military video address on the 41th day of Russia's war against Ukraine.
Glory to Jesus Christ!
Dear brothers and sisters in Christ! Today is Tuesday, April 5, 2022. Ukraine is hosting the 41st day of a terrible, deadly war that kills tens, hundreds of civilians on our land every day. Experiencing the time of Lent, we go to the bright holiday of Christ's Resurrection. It is at this time that Christians of all faiths worship the crucified Savior.
The Christian faith teaches us not to turn our eyes away from God, who became a man whom man despised, crucified, and killed with the most shameful death. The Christian faith also teaches us to honor the wounds of Christ, to kiss them. For we know that by his stripes we are healed, as the prophet Isaiah wrote.
These days, Ukraine is going through its Golgotha, its crucifixion. Today I ask Christians all over the world, all people of good will: do not turn your eyes away from the suffering, humiliation, death and wounds of Ukraine!
Terrible shots of war crimes in the cities and villages of Ukraine are before the eyes of the whole world.
Literally a few tens of kilometers from the center of Kyiv we see hundreds of bodies killed by a shot to the back of the head. We see the wounds of the Ukrainian people.
When we ask why this happened, why these innocent people were tortured and then executed, the witnesses of these horrors say that it was only because they were Ukrainians, because they spoke Ukrainian. Everyone was asked about his profession. If someone was a teacher, he was killed immediately because he taught in Ukrainian and educated Ukrainians. If he was an athlete, he was killed because he was developing Ukrainian sports. If an artist, a director, he died because he nurtured Ukrainian culture.
We see that Russia's war against Ukraine has a clear ideological basis - this has been said in recent days at the highest levels of Russian power. This war is a denial of the existence of millions of Ukrainian people. It is being held today in order to finally "solve" the Ukrainian issue.
Once again, I call on the whole world: do not take your eyes off Ukraine. Because the wounds of Ukraine today can heal you from the illusions of your comfort zone, from your indifference, from the lack of your landmarks in your countries and societies.
Today we ask the whole world to pay attention to the crimes against Ukraine that are worthy of an international tribunal, because the above actions are taking place throughout Ukraine today: in Rubezhnoye and Popasnaya in Donbas, in Mariupol in the Ukrainian south. We speak to the conscience of modern man: we will do everything to stop the new murderous ideology that is bearing fruit in the lands of Ukraine and which may be worse than Nazism. This ideology is still awaiting its Nuremberg Trials.
Today I would like to express my special gratitude to our volunteers, who are the first to touch the wounds of the Ukrainian people and who are representatives of different nationalities and religions. Thank you for that. Today, being a volunteer in Ukraine is life-threatening, because most people die when green corridors are allegedly created and then mercilessly fired upon. How many volunteers who brought food to those who are dying of hunger were killed by Russian bullets ...
Today we ask: crucified our Savior, save Ukraine! God bless our army, which saves the lives of our people. God, bless our people who seek in You, in Your wounds, the only salvation and protection.
The blessing of the Lord be upon you, by His grace and love of man, always, now, and forever and ever. Amen.
Glory to Jesus Christ!
Text Source: UGCC YouTube Channel