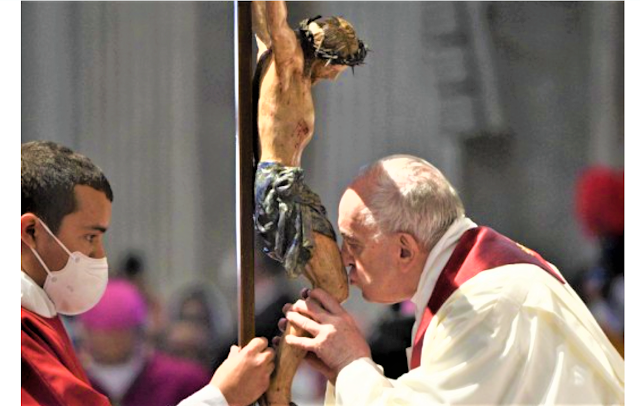 Pope Francis celebrated the Passion of the Lord on Good Friday. Cardinal Raniero Cantalamessa gave the homily and invited Christians to reflect on Jesus – the truth – and to cling to Christ, who never passes from our changing world.

As reported by Benedict Mayaki, SJ, for Vatican News, Cardinal Raniero Cantalamessa focused on the dialogue of Jesus with Pilate from the Gospel of John, during his sermon at the Celebration of the Passion of the Lord held at St. Peter’s Basilica on Good Friday, and presided over by Pope Francis.

The Preacher of the Papal Household explained that through the dialogue which began with Pilate’s question: “Are you the king of the Jews?”, Jesus tried to lead Pilate to “a higher plane”, to see if he does not simply repeat an accusation from others. Hence Jesus asks him in turn, “Do you say this on your own, or have others told you about me?”

Cardinal Cantalamessa remarked that today, as in the past, man asks himself “what is truth?” However, in countless debates on religion and science, faith and atheism, Jesus is hardly mentioned, and in cases that He is, it is often treated as an “irrelevant digression.”

Some even go beyond Pilate’s skepticism, refusing that the question should not be asked because for them, “the truth simply does not exist! Everything is relative, nothing is certain!”

The consequence of this, the Cardinal noted, is that “the word ‘God’ becomes an empty vessel for everyone to fill at will.” However, it is precisely for this reason that God took care to give content to His name and “the Word became flesh” and “truth became flesh.”

Cardinal Cantalamessa went on to note that Pilate’s words: “Your people and the chief priests have handed you over to me” (Jn 18:35) also offers another reflection addressed to believers and men of the Church.

“People of your Church, your priests have abandoned you, they have discredited your name with horrendous misdeeds! And should we still believe in you?” he asks.

To this, the Cardinal responded, quoting the words of J.R. Tolkien to his son: “Our love may be chilled and our will eroded by the spectacle of the shortcomings, folly, and even sins of the Church and its ministers, but I do not think that one who has once had faith goes back over the line for these reasons (least of all anyone with any historical knowledge)…” Tolkien adds that “It is convenient because it tends to turn our eyes away from ourselves and our own faults to find a scapegoat.”

Concluding, Cardinal Cantalamessa pointed out that we celebrate Easter this year amid the noise “of bombs and explosions not far from here.” In this regard, he called for repentance and appeals that swords be beaten into plowshares and spears into pruning hooks. (Is 2:4)

He also remarked that these events have reminded us that “the structures of the world can change form one day to another” and everything passes and ages. The only way to escape the current of time, which drags everything along with it, is “to pass on to that which does not pass” and to “put our feet on firm ground.”

“Easter, Passover, means passage: let us all aim to experience a real Easter this year,” the Cardinal urged. “…let us pass on to the One who does not pass. Let us pass on now with our heart, before passing on one day with our body!”