In an area of Kaduna state, Nigeria, a kidnapped priest has died after torture. Father Joseph Akete Bako, parish priest of St. John's Church in Kudenda in the local government area of Kaduna South, was kidnapped the night of 8 March in an assault on the parish house during which a person was killed. In the press release below the archdiocese indicates he died between the 18-20 of April, 2022. The 48-year-old priest was taken from his residence after the bandits killed one security guard. The Chancellor, Catholic Archdiocese of Kaduna, Rev. Fr. Christian Okewu Emmanuel, who confirmed the sad development in a statement on Wednesday May 11, 2022.
Father Emmanuel Anyanwu told Catholic charity Aid to the Church in Need (ACN): “He was tortured because they were forcing him to pay a huge amount of ransom for his release. In this case, there was physical torture and beatings which caused him huge amounts of pain and agony."

Please Pray for their safe return and for the victims, RIP.j 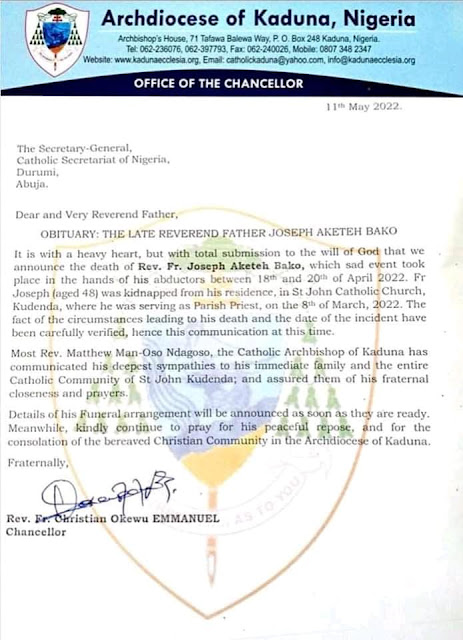