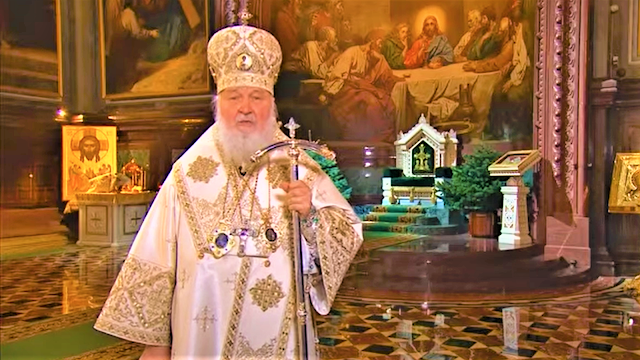 The Official Communications for the Orthodox Church of Russia issued a statement regarding Pope Francis' interview with an Italian magazine. In the interview the Pope criticizes the war with Ukraine.
The Catholic Bishops of Europe have also asks Patriarch Kirill to speak out against the war against Ukraine. So far, this war has caused the death of over 3,000 civilians since February 24th, 2022.  The Russian Orthodox Church has approximately 150 million members.
A statement was issued by the communications service of the Moscow Patriarchate’s Department for External Church Relations (DECR). On Wednesday, May 4, 2022, the it released the following response:
Explanation of the DECR Communications Service in connection with the interview of Pope Francis to Corriere della sera
DECR Communication Service, 05/04/2022. It is regrettable that a month and a half after the conversation with Patriarch Kirill, Pope Francis chose the wrong tone to convey the content of this conversation. Such statements are unlikely to contribute to the establishment of a constructive dialogue between the Roman Catholic and Russian Orthodox Churches, which is especially needed at the present time.

Here is what the Patriarch actually said in a conversation with Pope Francis on March 16: “Thank you for the opportunity to organize this meeting. When we met in Cuba in 2016, I told you that we are meeting at the right time and in the right place. And although now our communication takes place using means of remote communication, I am convinced that we are communicating again at the right time. With your permission, I would like to share with you my vision of the current difficult situation. Of course, we live in different information fields: the Western media did not talk or practically did not talk about some of the facts that I would like to draw your attention to.

Further, Patriarch Kirill noted that the conflict began in 2014 with the events on the Maidan in Kyiv, which resulted in a change of Ukrainian power. He paid special attention to the interlocutor on the events in Odessa and its consequences: “A peaceful rally of Russian-speaking residents took place in this city, defending their right to use their native language and culture. This peaceful meeting was attacked by representatives of the Nazi groups: they began to beat the demonstrators with sticks. People began to seek refuge in the nearby building of the House of Trade Unions. And at that moment something terrifying happened: this building was locked and then set on fire. People tried to escape by jumping from the second or third floor and, of course, crashed. Those who approached the windows, not daring to jump out, were shot from below. We followed all this on television almost live.

Further, Patriarch Kirill recalled that at the end of the Soviet era, Russia received an assurance that NATO would not move an inch eastward. However, this promise was broken, even the former Soviet Baltic republics joined NATO. As a result, a most dangerous situation has developed: NATO borders are located 130 kilometers from St. Petersburg, the flight time of missiles is only a few minutes. If Ukraine were admitted to NATO, then the flight time to Moscow would also be several minutes. Russia could not and cannot allow this to happen.

In conclusion, the Patriarch emphasized: “Of course, this situation is associated with great pain for me. My flock is on both sides of the confrontation, they are mostly Orthodox people. Part of the opposition applies to your flock. Therefore, I would like, abstracting from the geopolitical component, to raise the question of how we and how our Churches can influence the state of affairs? How can we contribute to the pacification of the warring with a single goal: to achieve the strengthening of peace and justice? It is very important in the current conditions to avoid further escalation.”

Pope Francis' response was correctly summarized by the Vatican News Service on March 16: "Pope Francis thanked the Patriarch for the meeting, motivated by the desire to show - as pastors of his people - the way to peace, to pray for peace, for a ceasefire. The Holy Father agreed with the Patriarch that the Church should not use the lexicon of politics, but the language of Jesus Christ. "We are shepherds of the same Holy Nation who believe in God, in the Holy Trinity, in the Holy Mother of God: therefore, we must unite in an effort to help the world, support the suffering, seek ways of peace, stop the fire." As noted in the same report, "the parties stressed the exceptional importance of the ongoing negotiation process."