Ukraine Archbishop says the Russians "...strike targeted bombs at schools where children study. The sons and daughters of our people are dying." 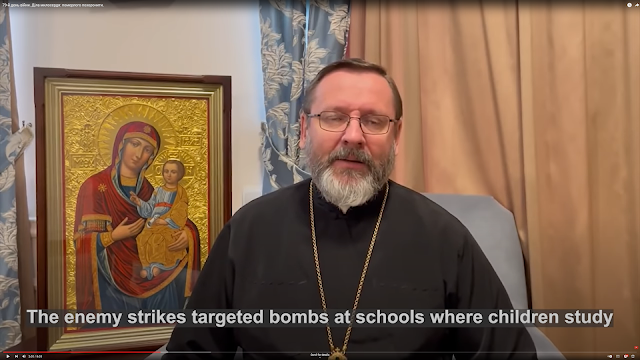 Dear brothers and sisters in Christ!

Today is Friday, May 13, 2022, and we especially pray to the Virgin of Fatima, to whom the Holy Father Francis dedicated Ukraine to stop the Moscow aggression. On this day, Ukraine is already experiencing the 79th day of nationwide opposition of our people to the full-scale war that Russia is waging against us, against Ukraine, against the children of our Motherland.

Extremely active hostilities continued in the south and east of Ukraine during the last night and last day. The east of Kharkiv region, Donetsk region and Luhansk region is on fire. Forest fires have become a great grief for the south of our country. According to reports, more than one and a half thousand hectares of forest are burning in the Kherson region. The occupiers do not make it possible to extinguish these fires, which are spreading with great force… through fire, through cannon fire, through airstrikes, through the fire of war…

The enemy is shelling the northern regions of Ukraine, which border Russia and have recently been liberated - Chernihiv and Sumy. They strike targeted bombs at schools where children study. The sons and daughters of our people are dying.

But Ukraine stands. Ukraine is struggling. Ukraine is praying. Ukraine calls for the protection of the Blessed Virgin Mary. We pray for overcoming evil, as requested by the Mother of God in her Fatima revelation, and we believe that the power of the grace of the Holy Spirit through the Blessed Virgin Mary rests on our people, gives us strength to resist evil and continue to defend the Fatherland.

Today let us reflect on another important work of charity for the body of our neighbor, which, according to the Catechism of our Church, completes the list of these works of charity - burying the dead.

We Christians believe in the resurrection of the dead and in the fact that human bodies laid in a tomb are like the seeds that a sower lays in the ground, waiting to be germinated. That is why we pass on the bodies of our dead with prayer, pain and tears, but at the same time with great reverence and sing the song of hope: "Christ rose from the dead, overcame death with death and gave life to those in the grave."

Today the land of Ukraine is richly sown with the bodies of the dead. We do not know exactly how many people, including civilians, have already died in this tornado of war. Every time our civilian infrastructure tries to recover, when we dismantle the rubble of bombed-out buildings, the bodies of dead innocent people are found everywhere. We try with great respect to hand over their lands and pray for their eternal rest.

With great respect, our people receive and hand over the lands of the bodies of our fallen soldiers. There is a custom: when a home with a lifeless body of our hero returns to a town or village, all the inhabitants of this settlement come out and accompany it, kneeling on both sides of the road.

Today we especially pray for our dead soldiers, those who gave their lives for the protection of the Motherland. We envelop with prayer, attention, support, human warmth of mothers and fathers, women and children, as well as the families of our fallen servicemen.

God, resurrect Ukraine! God, give Your Holy Spirit to the breathless bodies, which in the resurrection will testify to the truth about those who killed them, and the truth about Ukraine, which defended life, peace and freedom!

God bless our land! God bless our people who mourn their slain sons and daughters! God, breathe in us the power of faith, hope and love, let us honor You even in the body of Your dead or lost son or Your daughter! God bless Ukraine, stop this war and give our people peace!

The blessing of the Lord be upon you, with His grace and love of man, always, now, and forever and ever. Amen.

Christ is Risen! He is Risen Indeed!