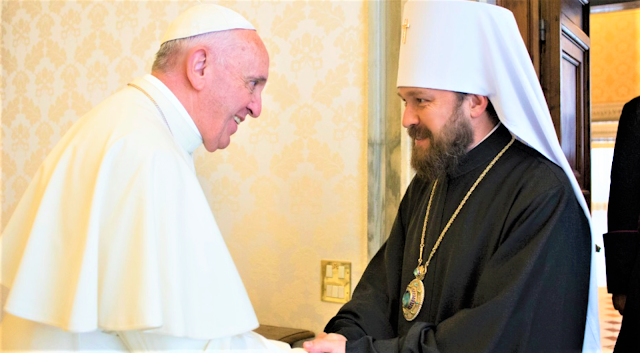 Metropolitan Hilarion, a key figure in the Russian Orthodox Church, has been removed from his position as chairman of the Department for External Church Relations of the  Moscow Patriarchate. This is a position that he has held since 2009.
He was critical of the war in Ukraine:
During an interview on January 29th, 2022 he said,
"First, let's remember at what cost did Russia win those wars. The price was millions of lives. Secondly, let's recall that every war brings incalculable disasters to people. We must also remember that an outcome of any war is unpredictable. Can we assume that Russia won the First World War? Let's remember the enthusiasm with which Russia entered it, what patriotic feelings accompanied the Russian Empire’s entry into this war. Could anyone then imagine that in three years Russia would collapse? For all these reasons, I am deeply convinced that a war is not a method of solving the accumulated political problems. Therefore, politicians and all of us must do everything in our power to prevent the escalation of the conflict and the development of events that the Americans are talking about today." Source: https://mospat.ru/en/news/88917/
Metropolitan Hilarion (age 55) met with Pope Francis at the Vatican in December 2021.
There were talks of a meeting between the pope and Patriarch Kirill of Moscow however due to the war the plans were cancelled.
Metropolitan Hilarion also recently visited Hungary, and met with Cardinal Péter Erdő, the Archbishop of Esztergom-Budapest and Primate of Hungary. Notably he gave the opening catechesis at the 2021 Catholic International Eucharistic Congress in Budapest. https://hilarion.ru/social/mitropolit-volokolamskiy-ilarion-posetil-vengriyu.html
The following is an excerpt from the Russian Patriarchate on the dismissal of Metropolitan Hilarion:
On June 7, 2022, at a meeting of the Holy Synod of the Russian Orthodox Church, the participants discussed the issue of governing the Budapest-Hungarian Diocese ( Journal No. 61 ).
A decision was made to release Metropolitan Mark of Budapest and Hungary from the administration of the Budapest-Hungarian diocese with gratitude for the work he has done.
Metropolitan Hilarion of Volokolamsk has been appointed Governor of the Budapest-Hungarian Diocese, Metropolitan of Budapest and Hungary , with his release from the duties of chairman of the Department for External Church Relations of the  Moscow Patriarchate, a permanent member of the Holy Synod and the rector of the General Church postgraduate and doctoral studies named after Saints Cyril and Methodius.
Metropolitan Anthony of Korsun was appointed Chairman of the DECR and a permanent member of the Synod, with the title of Volokolamsky, with temporary retention of the management of the Exarchate of Western Europe and the position of head of the Office of the Moscow Patriarchate for Institutions Abroad , with release from the management of the Korsun diocese .  Source: https://mospat.ru/en/news/89360/