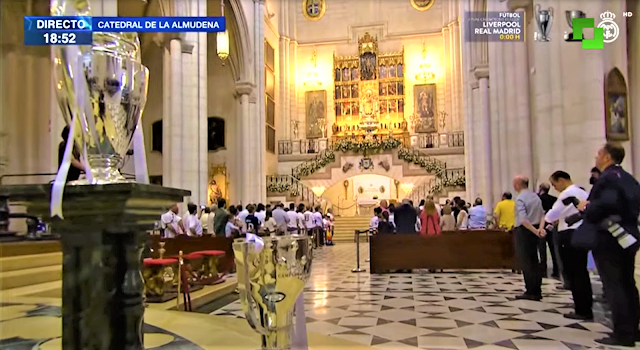 The Real Madrid football team, the new champions of the Champions League (CL), went to the cathedral of the Spanish capital after returning from Paris on Sunday evening and presented the trophy to the city's patron saint, the Virgin of Almudena . The team was greeted by Cardinal Carlos Osoro who praised the "culture of encounter" and team spirit. "I thank you from the bottom of my heart for taking the name of Madrid to every continent," said the Archbishop of Madrid.
Along with the CL Cup, Real also offered the Spanish Football League Victory Cup won a month ago. Real Madrid's Director of Institutional Relations, retired player Emilio Butragueno, read out intercessions, including that those present "... may experience the maternal protection of the Virgin Mary". Real Madrid President Florentino Perez thanked the archbishop for the reception in the cathedral. The team strives to cultivate values ​​such as "effort, self-improvement and modesty" and thus, as a "point of reference for millions of people", to be a good example, especially for children.
Although Spain is a secular country, the tradition of offering championship titles to the respective patron saint of the city is still kept. A year ago, Real rivals Atletico Madrid also presented the trophy of their eleventh Spanish championship title in the same cathedral to the Virgin of Almudena. At the victory celebration on Sunday, thousands of fans lined the square in front of the church with the entire team.
The Virgin of Almudena (Virgen de la Almudena) is a medieval representation of Mary, and is the patron saint of Madrid.  The name derives from the Arabic word "Al Mudayna" (the citadel) from Dutch sculptor Diego Copin de Holanda (circa 1500).