#BreakingNews 4000 People at the Pro-Life March for Life in Berlin, Germany with Many Youth and Support of Churches 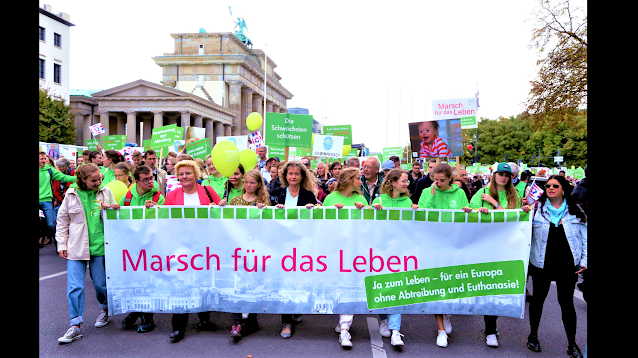 4,000 Participants stand up for comprehensive human dignity at the  MARCH FOR LIFE 2022:
A large PRO-LIFE RALLY and Demonstration in the Political center of Berlin, Germany
Press release 09/17/2022
"Women don't need the sentence: You can't do it. They need sensitive support so that they can develop their great potential.” With these words, the midwife Sarah Göbel gave an insight into the situation of women in a pregnancy conflict at the opening rally of this year's March for Life. Most women would like to have a child of their own accord, but are under massive pressure from outside. Even after an abortion, it is essential to continue to support women. Sylvia Pantel, Managing Director of the Foundation for Family Values ​​and former member of the Bundestag, spoke about the socio-political perspective of this drama. She commented on the previously recorded quotes from politicians in the governing coalition and a representative of the Jusos.
Another important topic in an interview with the physician Prof. Dr. Paul Cullen was the freedom of conscience of people working in the medical fields. In Sweden, midwives are only allowed to work if they are performing abortions, while in Canada, for the first time, a nurse who refused to be vaccinated because many vaccines are made with cell lines from aborted children was brought to justice for the first time. Hubert Hüppe, Member of the Bundestag and former Federal Government Commissioner for the interests of people with disabilities, referred to many other threats to people before and after birth, including selective forms of prenatal diagnostics and the legalization of assisted suicide. “The right to life is the most important fundamental right.
If you don't have that
In her welcome address, Alexandra Linder, chairwoman of the BVL, also mentioned positive examples of the protection of human rights, for example in the USA, where after 51 years more than 63 million children were aborted - a third of them Afro-American, with a population share of about 16% - going over to offering help and support instead of abortion to the Afro-American women, who are obviously also being discriminated against here. In Hungary, according to Linder, gynecologists are fulfilling their medical duty of care if they carry out an initial examination and show the results to the women. "It is part of the full education of pregnant women," says the BVL chairwoman. The rally at the March for Life, moderated by Linder and the BVL board members Hartmut Steeb and Cornelia Kaminski, continued with musical accompaniment from the band Gnadensohn with the American Terrisa Bukovinac, who as a declared atheist vehemently supports the right to life. She emphasized the need for social justice and everyone's unconditional commitment to it. Under no circumstances should people in need be left alone. The youth for life concluded with a report from the Pro Life Congress and a flash mob dance, which got the participants in the mood for the subsequent demonstration through the city.
The March for Life starts every year with a big rally. The stage guests come from science, politics, art, society and the church. They are professionally or voluntarily committed to the right to life or report on their personal adventures and experiences. The participants travel from all over Germany and Europe to set an example in Berlin for more protection of life and to stand up for a humane future. As every year, the event was peaceful and joyful on the part of the participants. The ecumenical service following the March for Life was led by the Vicar Bishop of the Greek Orthodox Metropolis of Germany, Emmanuel Sfiatkos, and Auxiliary Bishop Thomas Maria Renz of the Diocese of Rottenburg-Stuttgart. With its 16 member associations and over 25,000 members, the Bundesverband Lebensrecht is committed to comprehensive human dignity and the associated basic rights from conception to death, regardless of origin, gender, age or state of health.
Source: https://www.bundesverband-lebensrecht.de/4-000-teilnehmer-treten-fuer-umfassende-menschenwuerde-ein-marsch-fuer-das-leben-2022-grosse-pro-life-kundgebung-und-demonstration-im-politischen-zentrum-berlins/
Germany March for Life Pro-Life