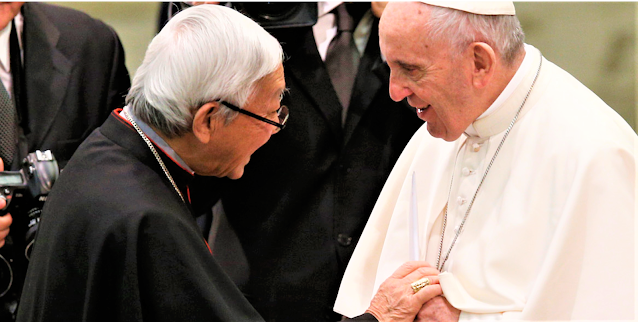 Hong Kong media report, retired Cardinal Joseph Zen's trial is postponed. The trial was supposed to start on September 19th, 2022 until September 23rd. However, the presiding judge contracted COVID-19. The cardinal and five other pro-democracy advocates are accused of running an unregistered charity and could at most be fined.
Experts believe that the original charge of undermining national security was dropped for fear of international reactions.  The trial of Cardinal Joseph Zen Ze-kiun and five important pro-democracy activists was supposed to start today at the West Kowloon Court but it was postponed until Wednesday.
According to Asia News, local media, including Sing Tao Daily, report that the judge in charge of the case, Permanent Magistrate Ada Yim Shun-yee, contracted COVID-19. The defendants are accused of improperly registering a humanitarian fund of which they were trustees.
On the 11th of May, police arrested Cardinal Zen, Hong Kong’s archbishop emeritus, and the other defendants on the more serious charge of "collusion" with foreign forces, in violation of a draconian national security law imposed by Beijing in the summer of 2020 to silence the pro-democracy movement. Without the indictment for undermining to national security, the defendants risk at best a fine of up to US$ 1,750.
In addition to the 90-year-old cardinal, the other defendants are the well-known lawyer Margaret Ng, singer-activist Denise Ho, former Legislative Council Member Cyd Ho, academic Hui Po-keung, and activist Sze Ching-wee. Cyd Ho is already in prison for taking part in an unauthorised demonstration. Several other pro-democracy advocates, including Catholic media magnate Jimmy Lai, are also in prison on the same charge.
Until it was closed in October 2021, the 612 Fund helped thousands of pro-democracy activists involved in the 2019 protests. Card Zen and his co-defendants pleaded not guilty. According to their lawyers, the charity was not required to register under the Societies Ordinance. The defence wants the ordinance to be interpreted in such a way as to take into account the right of citizens to associate as enshrined in Hong Kong’s Basic Law, which will go a long way to show how much freedom is left in the former British colony.
Analysts note that the authorities in all likelihood softened the charges out of concern for international fallout. In fact, during his flight back from his apostolic visit to Kazakhstan on Thursday, Pope Francis spoke about the issue. Although he said he did not feel he could “qualify China as undemocratic” because of his complexity, the pontiff also noted that, “It is true that there are things that seem undemocratic to us. Cardinal Zen is going to trial these days. And he says what he feels, and you can see that there are limitations there. But more than qualifying, I try to support the path of dialogue.”
Edited from Asia News IT