Saint September 28 : Our Lady Undoer of Knots - Entrust the Knots of Our Sins and Miseries to Mary the Mother of Jesus! 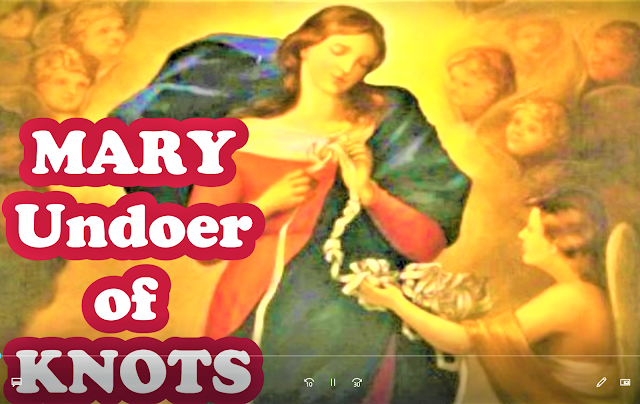 This devotion emerged in Germany in the late seventeenth century.  Its roots, go back to the early Church in the second century and the meditations of St. Irenaeus on Our Lady’s virtues: “The knot of disobedience of the first woman, Eve, was undone by the obedience of Mary; the knot the virgin Eve had created was undone by the Virgin Mary through her faith.”

The devotion has its origin in the marital crisis of Wolfgang Langenmantel and his wife Sophie Imhoff who married in 1612. They considered divorcing, but before they separated, Wolfgang decided to go to the nearby monastery of Ingolstadt by foot to the home of Jesuit priest Fr. Jakob Rem to ask for advice. Fr. Rem was known for promoting devotion to Our Lady “thrice admirable.” He encouraged Wolfgang to entrust his situation to the intercession of the Blessed Mother “thrice admirable” (Samperi 2014, 6–9).

Over the course of twenty-eight days, Wolfgang went on pilgrimage on four consecutive Saturdays to the monastery to lay his marriage with Sophie at the feet of the Blessed Mother. The situation of the spouses gradually changed to the point of mutual reconciliation. The graces requested of God, reconciliation and forgiveness, were granted through the Blessed Mother. Their marriage was saved and the Divider defeated (Samperi 2014, 6–9).

The knots often depicted in images of Our Lady Undoer of Knots represent whatever causes suffering in our lives such as discord in families, misunderstanding between children and parents, violence, anger, drug addiction, fear, and lack of peace. Most importantly, they are whatever impedes the glory of God from shining in our lives (Bourgerie and Bourgerie 2014, 27).

In gratitude for Wolfgang and Sophie’s reconciliation, their grandson Hieronymous Ambrosius von Langenmantel entered religious life and commissioned the painting of Our Lady under this title to be displayed in a chapel of the Church of Saint Peter am Perlach in Augsburg. Our Lady is represented according to the image described in Revelation 12:1: “A great sign appeared in the sky, a woman clothed with the sun, with the moon under her feet, and on her head a crown of twelve stars” (see Samperi 2014, 10). Upon close inspection of the image, one will note on the lower part Tobias being guided by St. Raphael on the road to his future wife Sarah (see the Book of Tobit in the Old Testament).

Fr. Bergoglio (Pope Francis) fell in love with this devotion as soon as he discovered it when he went to Germany to complete his thesis on the German theologian Romano Guardini in the 1980s. He visited the Church of St. Peter am Perlach, overseen by his Jesuit confreres, where he came across this unique painting. He decided then to take the image to Buenos Aires as a gift for his parishioners. Mary Undoer of Knots was welcomed with great enthusiasm in South America (Samperi 2014, 13–14).

A reproduction of the image was eventually enthroned in the parish of San José del Talar in Buenos Aires, and that church was elevated to the dignity of a shrine in 2010 by Cardinal Bergoglio. On the fifteenth anniversary of the enthronement of the image at the shrine, Cardinal Bergoglio affirmed in his homily: “We all have knots or deficiencies in our hearts, and we go through difficulties. God, our good Father, who distributes his grace to all of his children, wants us to trust Her, to entrust to Her the knots of our sins, the tangles of our miseries that prevent us from uniting ourselves with God, to allow Her to untie them and bring us to Her son Jesus” (Samperi 2014, 15).