“Too many people are dying”: Human Rights Experts Implore World Leaders to Show Concern for Nigerian Victims after a Deadly Year for Christians 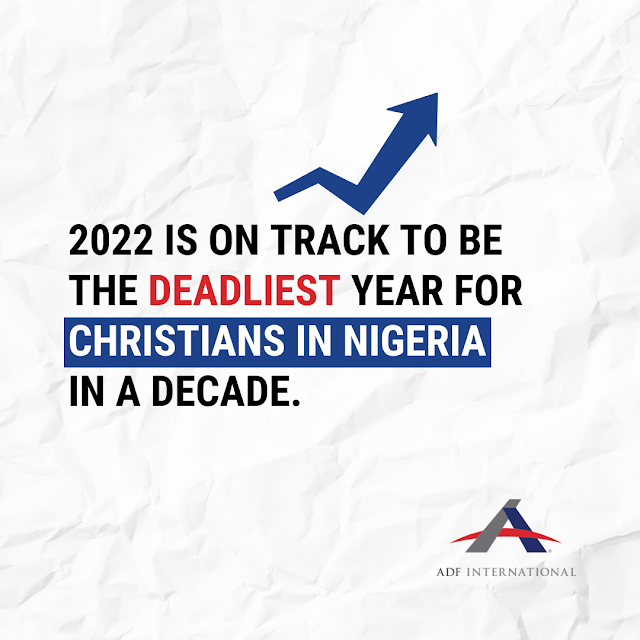 Washington, D.C. (20th September 2022) – Sixty-eight groups and experts from around the world have signed a letter to Antony Blinken, US Secretary of State, calling for Nigeria to be reinstated as a “Country of Particular Concern (CPC)”.

About 14 Christians are murdered in Nigeria each day because of their faith.

A “CPC” status is set aside for countries that engage in or tolerate severe violations of religious freedom in a way that is egregious, systematic, and ongoing. Former Secretary of State Mike Pompeo designated Nigeria as a CPC in 2020, but Secretary Blinken removed the designation in 2021 without explanation. The US Commission on International Religious Freedom (USCIRF) called the removal of this status from Nigeria “appalling”.

“It is undeniable that severe religious freedom violations are taking place nearly on a daily basis in Nigeria, and things are only getting worse. The international religious freedom community is united in believing that the 2021 removal of the Nigeria’s Country of Particular Concern status was a grave mistake, and Secretary Blinken should take this opportunity now to right this wrong. Too many people are dying, too many priests are being kidnapped, and the international community should speak with one voice about these religious freedom violations seriously. We have to speak up loudly for all of the victims in Nigeria,” said Sean Nelson, Legal Counsel for Global Religious Freedom for ADF International.

Today’s letter raises concerns over the increase in violence targeting “Christians and Muslims who reject extremism” from terrorist groups like Boko Haram and Islamic State – West Africa Province (ISWAP), as well as other militia groups.

More Christians killed in Nigeria than rest of the world combined

The initiative, led by ADF International, was signed by former US Ambassador at Large for International Religious Freedom Samuel Brownback, former USCIRF Chair Katrina Lantos Swett, former Congressman who introduced the International Religious Freedom Act of 1998 Frank Wolf, and Lord David Alton of the United Kingdom. The religious freedom advocates also called on the Secretary to appoint a Special Envoy in the region to investigate the religious freedom situation and make recommendations in consultation with local experts.

The letter discusses high-profile violations of religious freedom, such as the 2022 Pentecost Sunday massacre of over 40 Catholics at St. Francis Xavier Catholic Church in Owo, Ondo State; prosecutions of humanist Mubarak Bala and Sufi singer Yahaya Sharif-Aminu for blasphemy; and the lynching of Christian college student Deborah Emmanuel Yakubu for her Christian faith.

“Open Doors found more Christians killed in Nigeria in 2021—4,650—than in all other countries in the world combined. The International Society for Civil Liberties and Rule of Law views the trend for 2022 as on-track to surpass that number, with no fewer than 2,543 Christians killed in jihadist-related violence in the first half of 2022,” reads the letter.

The letter further raises concerns over the targeting of journalists in Nigeria, such as Luka Binniyat, who reported on attacks on Christians from militias.

The public letter to the Secretary of State was published as, concurrently, ADF International launched a public petition to the newly-appointed UN High Commissioner for Human Rights, Volker Türk.

The petition calls on Türk to speak out publicly on faith-based persecution in Nigeria; to work with the government to end the perpetration of the “heinous crimes”; to conduct an inquiry into the sexual violence, forced conversion, and forced marriage committed by terrorist groups against women and girls belonging to religious minorities; and raise awareness about the administration of injustice under Sharia courts.

These global initiatives take root as more stories emerge from Northern Nigeria. ADF International has highlighted several cases in which they have intervened to protect young Christians from violence and even the death penalty for their beliefs.

Hannah* was sued before the Sharia Court and her life was threatened because she did not convert to Islam, choosing to follow Jesus instead. Faith* was evicted from her home because of her faith and then accused of apostasy before the Sharia Court. Elijah* faced death threats from his own family after his conversion. Then his family sought the death penalty at the Sharia Court. Barbara* was displaced to Cameroon where she converted to Christianity and remarried after her husband divorced her. When they returned to Nigeria, the ex-husband sued on grounds of “adultery”. The judge ordered they be sent to prison pending their hearings.

Read more on these cases here.