Vatican to Project a Video of the Life of the 1st Pope, St. Peter, on the Facade of St. Peter's Basilica as Part of an Art and Faith Initiative - FULL Conference 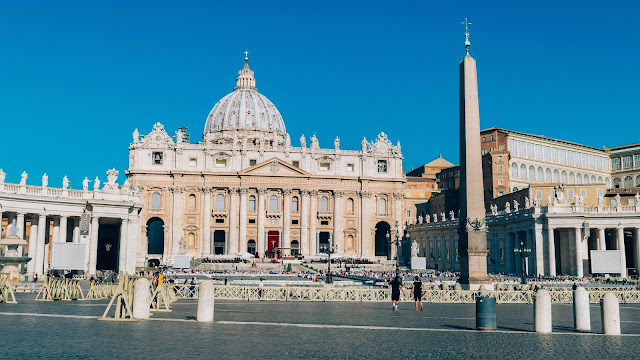 Holiness is a theme dear to Pope Francis. In his pontificate the number of canonized saints is growing more and more and he himself "on the call to holiness in the contemporary world" wrote the apostolic exhortation Gaudete et exsultate in 2018, proposing "to incarnate it in the current context, with its risks, its challenges and its opportunities "(n. 2). The conference "Holiness today" arises from the request to put the issues on which work for the Causes of beatification and canonization is carried out on a daily basis with the world of today. It is not an “alternative” moment, neither to what the Dicastery does every day, nor to the moments of exchange and formation that are organized and held internally. For the Dicastery, organizing a conference means carrying out a task of investigation and study, capable of involving experts in theology and spirituality, society and communication, in order to carry out its "service" in a more complete way (cf. Praedicate Evangelium, I , 8 and II, 1). In the past, the Congregation for the Causes of Saints has organized moments of reflection open to all, talks and symposia on specific themes of canonized holiness, such as scientific issues - think of the Colloquium Medicorum of 1988 - or more spiritual aspects - for example, Eucharist, Holiness and Sanctification in the year 2000. The intention is to make these appointments more regular now.
The task of the Dicastery is not to "manage" holiness, but to recognize it through specific and coordinated phases of discernment. This is why it has been chosen that this year's conference focuses on two essential aspects of the causes of beatification and canonization. The first aspect is that of the "reputation of holiness", which must be ascertained prior to the instruction of any diocesan inquiry on a Servant of God. The "reputation of holiness" combines two nuances: on the one hand, the belief of the faithful about the holiness of a person, conviction that arises from the perception of an exceptionality and has as a consequence the request for intercession for one's own or the needs of others; on the other hand, the capacity that this exceptionality awakens in the People of God the consciousness of all being called to be Saints: what the Second Vatican Council called "universal vocation to holiness" (LG, chap. V). Canonized holiness, which proposes intercessors and models to inspire to the Church, has mainly this aim: through the identification of exemplary figures, who go beyond ordinary life, to call the baptized to live their everyday life in a holy way. St. John Henry Newman, in his Prayers and Meditations, proposed his Short way to perfection (27 Sept. 1856): "Perfect is he who does his daily actions perfectly, and to find perfection we do not have there is no need to go beyond these limits ».
The second theme on which the Conference intends to dwell is connected to this first aspect. It is a reflection on the meaning of Christian "heroism". From the earliest centuries the Church has safeguarded first of all the memory of her martyrs and then also of her "confessors", as true "heroes" of the faith. Now, it is a question of understanding what heroicism means today, especially in relation to the exercise of virtues, martyrdom and the offering of life. The Second Vatican Council again writes: "In the life of those who, although they participate in our human nature, are nevertheless more perfectly transformed into the image of Christ, God manifests his presence and his face to men in a living light". In Gaudete et exsultate Pope Francis explains that "in the processes of beatification and canonization, the signs of heroism in the exercise of virtues, the sacrifice of life in martyrdom and also the cases in which an offering of one's life has occurred are taken into consideration. for others, kept until death. This donation expresses an exemplary imitation of Christ, and is worthy of the admiration of the faithful "(n. 5).
It is easy to understand that a definition of Christian heroism has a very particular resonance in the current cultural context, where so often the relative seems to prevail over truth and instability prevails over any courageous life project.
Therefore, I sincerely hope that our Conference on "Holiness Today" marks an important moment of reflection on the Causes of beatification and canonization and this not only for the work that the Dicastery carries out, but also for the repercussions that it inevitably has. for the believing conscience of the People of God.