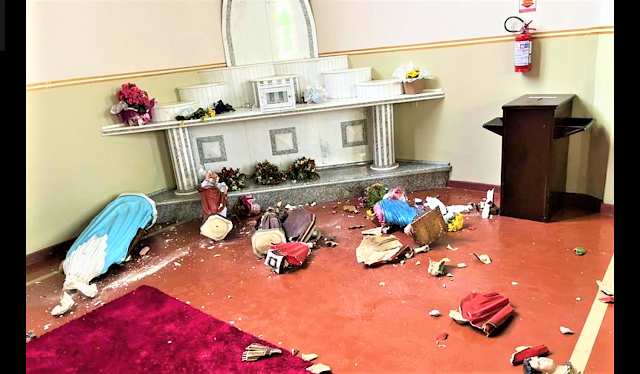 Police are investigating an invasion of the Saint Matthew Church in São Mateus do Sul, in the southern region of Paraná, Brazil. According to church records, at the site, almost 30 sacred images were broken, and nothing was taken.

Among the broken pieces, according to Father Diego Ronaldo Nakalski, parish vicar, is a centenary image of Nossa Senhora das Graças that also has historical significance for the city.

According to the priest, the saint has been with the community since the old chapel, which was part of the formation of the municipality. In addition to it, images of saints, Jesus and other apparitions of Our Lady were also broken.

The priest reported that he registered a Boletim de Occurrence (B.O.) of the case, and the Civil Police analyzes the images from security cameras in the churchyard and neighboring shops.

As of the publication of this report, no suspects had been identified.

A Mass was held in reparation and the local bishop issued a letter; below video.

Letter from the Bishop:

Today, Monday, October 10, 2022, our dear church of São Mateus, in São Mateus do Sul was violated and several images were broken inside. We still have no clue as to who could have done such a sad and inhumane act, which touches the faith and hearts of thousands of people. We trust in God and hope that such a person can respond adequately for the acts he has committed and that other acts similar to this will not happen again.

Despite our deep sadness for what happened, our Christian faith makes us see beyond, because we are inspired by the Divine Master, Jesus Christ, who conquered evil at its root by not reacting with hatred even in the face of death, who died forgiving and asking the Father forgiveness for those who killed him. He knew, like the God he is, that the only way to overcome the diabolic forces that incite us to hate is through a love that goes to the last consequences.

We are witnessing the spread around the world, and also in Brazil, especially in this electoral period, all kinds of conflict through hatred that divides people, especially using social networks, leading them to that division that only makes evil grow, that separates people, that does not allow dialogue, teaching to see in those who think differently from us an enemy to be fought at any price. Certainly there can be many causes that led the person who desecrated our temple in St. Matthew to have done what he did, even an act of sheer insanity. But, in the current context, we have to be alert to the fact that there may be motivations whose objective is to spread fear and conflicts in the middle of society.

In this way, as Bishop of this portion of the People of God, especially those who live in Saint Matthew, I urge everyone not to be moved by feelings other than those to which true disciples of Jesus Christ are called. That they do not allow, under any circumstances, to be dragged by the easy interpretations that aim to sow discord, division and fear among us. Despite the deep consternation caused by the breaking of our precious religious images, it is necessary for everyone to know that they cannot so easily break the unity, the union between us. May they know that they cannot “break” that faith received in our Baptism and strengthened in Confirmation, a faith nourished by the Eucharist that calls Christians to live more and more united with the Lord and united among ourselves, forming a single body, the Body of Christ. , which is the Church, whose “gates of hell cannot prevail against her” (Mt 16:18). In fact, nothing will have the strength to overcome our faith, as long as we are in that love that imitates the love of Jesus Christ, the only way that will make us have the right answers to the aggressive events of our days and the only way that can keep us in that peace. which surpasses all understanding (cf. Phil 4:7).

May God bless our people of São Mateus in this painful time, with whom we hope to be together soon for a religious act of prayers and reparation for the wrong committed and suffered.