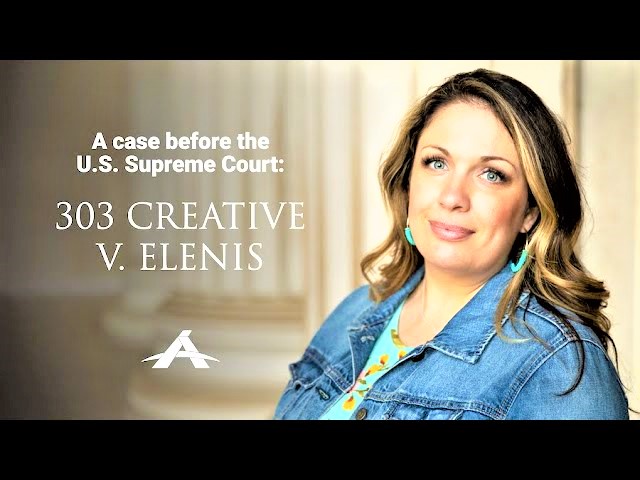 The Alliance Defending Freedom will defend graphic designer Lorie Smith this fall at the U.S. Supreme Court.In a reply brief Alliance Defending Freedom attorneys filed with the U.S.
Supreme Court  in 303 Creative v. Elenis, Denver-area graphic artist and website designer Lorie Smith explained that Colorado’s own admissions buttress why its infringement on her freedom of speech violates the Constitution.

Specifically, the brief explains that the state’s admissions that she serves clients “regardless of classifications” like “sexual orientation” and that her websites are “expressive” and “communicate a particular message” make the case simple: “Colorado may not use its public-accommodation law to compel speakers to convey government-approved messages.”

In June, numerous parties—including artists, publishers, LGBT-advocacy organizations, legal scholars, and 20 states—filed friend-of-the-court briefs with the high court asking it to rule in favor of free speech in Smith’s case.

The Catholic Bishops of the USA, on June 2, also filed an Amici Brief with 5 other faith groups (Colorado Catholic Conference, The General Council of the Assemblies of God, The General Conference of Seventh-day Adventists, The Billy Graham Evangelistic Association, and Samaritan’s Purse) in support of a Web designer who objected to promoting homosexual marriage.

Lorie Smith is an artist who runs her own design studio, 303 Creative. She specializes in graphic and website design and loves to visually convey messages in every site she creates. Lorie left the corporate design world to start her own small business in 2012 so she could use her skills to promote causes consistent with her beliefs and close to her heart, such as supporting children with disabilities, the beauty of marriage, overseas missions, animal shelters, and veterans. She was excited to expand her portfolio to create websites that celebrate marriage between a man and a woman, but Colorado made clear she’s not welcome in that space. A Colorado law is censoring what Lorie wants to say and requiring her to create designs that violate her beliefs about marriage. Lorie enjoys working with people from all walks of life, but, like most artists, can’t promote every message. Lorie’s decisions about which projects to design are based on what message she’s being asked to express, not who requests it. After realizing that Colorado was censoring her—and seeing Colorado use this same law to punish Masterpiece Cakeshop owner Jack Phillips—Lorie challenged the law to protect her freedom and her art studio.

In July 2021, the U.S. Court of Appeals for the Tenth Circuit ruled against Lorie, holding that Colorado can force her to create websites promoting messages that contradict her beliefs about marriage. Chief Judge Tymkovich wrote a powerful dissent, calling the majority’s holding “unprecedented” and “staggering,” stating that “[t]he Constitution protects Ms. Smith from the government telling her what to say...” She appealed to the Supreme Court of the United States on September 24, 2021, and the Court granted her petition for review on February 22, 2022. Oral arguments are expected this fall.