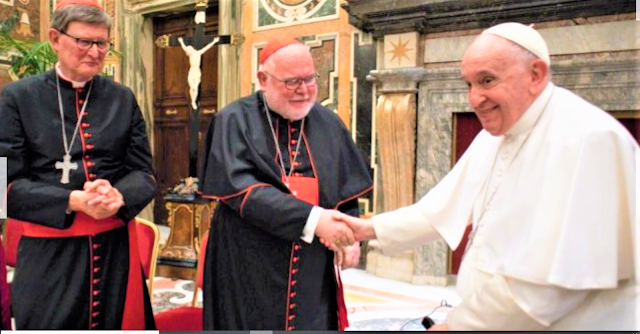 On November 17th, Pope Francis received the members of the German Bishops' Conference (DBK) in audience on the occasion of their ad limina visit.

There are 63 German bishops in Rome this week for their ad limina visit, which ends on  November 18th.

"The two-hour meeting was designed as an open discussion, in which the bishops could raise their questions and topics and the pope answered individually." The bishops' conference said this in a statement afterwards.

"In terms of content, it was about considerations of pastoral care in changing times, the self-image of the priestly and episcopal office, the commitment of lay people in the church and the challenge of how evangelization can succeed in the context of a secular world."

Discussion of the Synodal path

In addition, the bishops reported on their experiences in the (arch)dioceses and the worldwide commitment of the church. "The question of political responsibility, social cohesion and a perspective for peace, in the face of global and regional conflicts, shaped the encounter," said the Bishops' Conference.

"During the conversation, aspects of the synodal path of the church in Germany and the worldwide synodal process were also discussed," the statement continues. These issues would be "deepered" on Friday at a meeting of the bishops with the heads of several Vatican dicasteries.