Saint November 21 : The Presentation of the Blessed Virgin Mary in the Temple by her Parents - #BVM 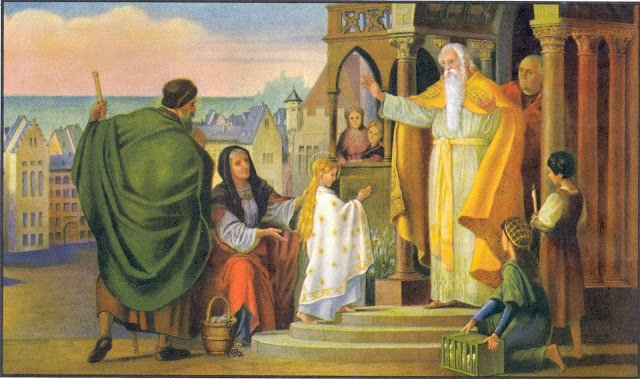 Saint Jerome, in his writings, says Our Blessed Mother, along with the other virgins committed to the temple, would arise at dawn and pray until nine o’clock. From 9:00 until 3:00, she would engage in manual work.
At 3:00, she would return to prayer. As Saint Jerome recorded, Our Blessed Mother was “One most applied to study, the most fervent in the chanting of Psalms, the most zealous in works of charity, the purest among the virgins...after Her will come countless legions of virgins consecrated to the Lord, both in the shadow of the altars or engaged in the charitable occupations of the Church in the world.” She shared her remaining food to the poor. Angels visited her regularly. She was described as beautiful and cheerful, never angry, and full of grace in her conversations. Mostly, Our Blessed Mother spent her time praying before the Holy of Holies.
The Following is from The Catholic Encylopedia:
The Protoevangel of James, the Gospel of Pseudo-Matthew, the Gospel of the Nativity of Mary, and other apocryphal writings (Walker, "Apocryph. Gosp.", Edinburgh, 1873) relate that Mary, at the age of three, was brought by her parents to the Temple, in fulfillment of a vow, there to be educated. The corresponding feast originated in the Orient, probably in Syria, the home of the apocrypha. Card. Pitra (Anal. Spici. Solesmensi, p. 265) has published a great canon (liturgical poem) in Greek for this feast, composed by some "Georgios" about the seventh or eighth century. The feast is missing in the earlier Menology of Constantinople (eighth century); it is found, however, in the liturgical documents of the eleventh century, like the "Calend. Ostromiranum" (Martinow, "Annus græco-slav.", 329) and the Menology of Basil II (e’ísodos tes panagías Theotókon). It appears in the constitution of Manuel Comnenos (1166) as a fully recognized festival during which the law courts did not sit. In the West it was introduced by a French nobleman, Philippe de Mazières, Chancellor of the King of Cyprus, who spent some time at Avignon during the pontificate of Gregory XI. It was celebrated in the presence of the cardinals (1372) with an office accommodated from the office chanted by the Greeks. In 1373 it was adopted in the royal chapel at Paris, 1418 at Metz, 1420 at Cologne. Pius II granted (1460) the feast with a vigil to the Duke of Saxony. It was taken up by many dioceses, but at the end of the Middle Ages, it was still missing in many calendars (Grotefend, "Zeitrechnung", III, 137). At Toledo it was assigned (1500) by Cardinal Ximenes to 30 September. Sixtus IV received it into the Roman Breviary, Pius V struck it from the calendar, but Sixtus V took it up a second time (1 September, 1585). In the province of Venice it is a double of the second class with an octave (1680); the Passionists and Sulpicians keep it as a double of the first class; the Servites, Redemptorists, Carmelites, Mercedarians, and others as a double of the second with an octave. In the Roman Calendar it is a major double. The Greeks keep it for five days. In some German dioceses, under the title "Illatio", it was kept 26 November (Grotefend, III, 137).
Blessed Virgin Mary Feast Days Memorials Saints Saints of November