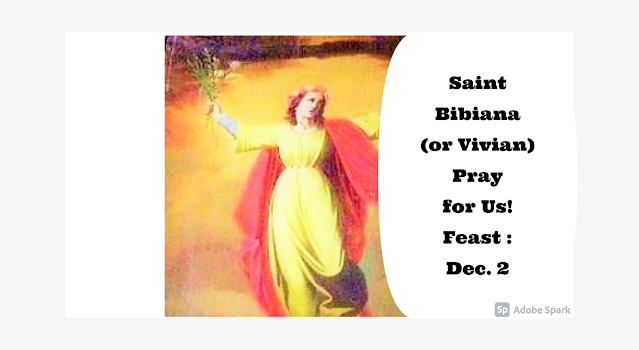 St. Bibiana MARTYR
Born:4th century in Rome
Died:361
Patron of:against epilepsy, against hangovers, against headaches, against insanity, against mental illness, epileptics, mentally ill people, single laywomen, torture victims
PRAYER:
Dear Saint Bibiana, through your fasting and prayer you were given the grace to endure suffering and torment at the hands of your persecutors. Intercede for us, dear saint, that we also remember that our Lord is always there to strengthen us and give us the grace to persevere. Amen.
The earliest mention in an authentic historical authority of St. Bibiana (Vibiana), a Roman female martyr, occurs in the "Liber Pontificalis" where in the biography of Pope Simplicius (468-483) it is stated that this pope "consecrated a basilica of the holy martyr Bibiana, which contained her body, near the 'palatium Licinianum'" (ed. Duchesne, I, 249). This basilica still exists. In the fifth century, therefore, the bodily remains of St. Bibiana rested within the city walls. We have no further historical particulars concerning the martyr or the circumstances of her death; neither do we know why she was buried in the city itself. In later times a legend sprang up concerning her, connected with the Acts of the martyrdom of Sts. John and Paul and has no historical claim to belief. According to this legend, Bibiana was the daughter of a former prefect, Flavianus, who was banished by Julian the Apostate. Dafrosa, the wife of Flavianus, and his two daughters, Demetria and Bibiana, were also persecuted by Julian. Dafrosa and Demetria died a natural death and were buried by Bibiana in their own house; but Bibiana was tortured and died as a result of her sufferings. Two days after her death a priest named John buried Bibiana near her mother and sister in her home, the house being later turned into a church. It is evident that the legend seeks to explain in this way the origin of the church and the presence in it of the bodies of the above mentioned confessors. The account contained in the martyrologies of the ninth century is drawn from the legend.
Source The Catholic Encyclopedia
Daily Saint Patron Saints Saint of the day Saints Saints of December