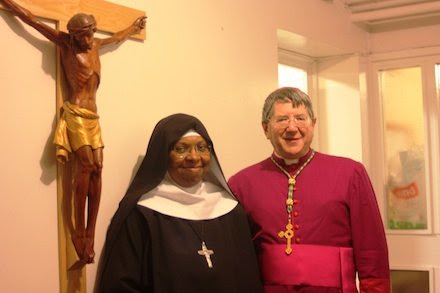 Mother Winsome with Mgr Keith Newton on New Year's Day
The Personal Ordinariate of Our Lady of Walsingham’s first monastery was founded on New Year’s Day.
On the Solemnity of Mary, Mother of God, the convent of the Sisters of the Blessed Virgin Mary in Oscott Hill, Birmingham, was filled with priests and lay members of the ordinariate, local parishioners and friends, for the Mass at which the community of 10 Sisters was formally established as the ordinariate’s first autonomous monastery.

The Sisters, formerly members of an Anglican Community in Wantage, Oxfordshire, professed their solemn vows, each placing her hands into those of the leader of the ordinariate, Mgr Keith Newton, who read the Decree of Erection, presided at the Mass and delivered the homily. The day was the first anniversary of the Sisters’ reception into the full communion of the Catholic Church.

In his homily, Mgr Newton said that January 1 was an appropriate day to mark a new beginning, especially for a community under the maternal care of the Mother of God, who teaches us, he said, “uniquely, though simply and effectively, how to follow her son as his disciples”.

Quoting Pope Paul VI’s description of Our Lady as “the attentive virgin” whose certainty of faith flowed from her contemplative life, Mgr Newton said this was the vocation to which the Sisters had been called. “Nobody can explain its value in the world’s terms but its power is immeasurable.”
Mary, Mgr Newton said, taught us to ponder the divine mystery, to listen to God’s voice deep within us. Addressing the Sisters directly, he went on: “For us, you will be the praying heart of the ordinariate”.

Mgr Newton appointed Mother Winsome as the first Reverend Mother for an initial period of three years. Subsequent Reverend Mothers will be elected in accordance with the constitutions of the monastery.

Mother Winsome said: “For us the day was a mixture of great solemnity, but also of deep joy. We each professed our original vows separately, in the case of some of the Sisters, more than 50 years ago. For us to be able to renew our vows solemnly and publicly and to be able to share this profound moment, when we have shared such a unique spiritual journey over the last two years, felt a very special gift of God to each of us and to us corporately as Sisters of the Blessed Virgin Mary”.

The Mass was followed by a reception for all in the Sisters’ refectory.
SHARED FROM CATHOLIC HERALD CO UK