Father James Stack died suddenly just four days short of his 84th birthday
About to celebrate his 84th birthday on 10 January and looking forward to the diamond jubilee of his ordination, Father James Stack had no thoughts of retirement. Instead the Diocese of Parramatta's oldest active parish priest insisted he'd "prefer to die in the saddle."
"And so indeed he did," the Most Reverend Anthony Fisher OP, Bishop of Parramatta told the more than 800 gathered at the Holy Family Catholic Church, East Granville this week, for the Funeral Mass of the Irish-born priest.
Fr Jim, as he was affectionately known, died suddenly on 6 January 2014. He suffered a fatal heart attack while swimming at Malabar Beach.

"By happy coincidence, I celebrated Mass and then had dinner with Fr Jim and some others the night before he died," Bishop Anthony said and recalled how the still-serving parish priest appeared in robust health and although his custom was to play golf each Monday with Bishop Emeritus David Cremin, Fr Jim announced his intention for this particular week to go surfing instead.
"Although not I think on a surf board," Bishop Anthony conceded with a gentle smile, and said that for the last of many Irishmen from All Hallows College in Dublin to serve in the Parramatta Diocese, God's choice of the beach was a very 'Australian' place for Fr Jim to make his exit.
In addition to Fr Jim's twin brother, Thomas Stack together with many of Fr Jim's nieces and nephews all of whom had flown to Australia from Ireland, the Funeral Mass was attended by six bishops, 55 priests, many religious and more than 700 friends and parishioners from the parishes across the Parramatta Diocese and the Archdiocese of Sydney.
Fr Jim served as Parish Priest to the Holy Family East Parish, Granville from 1976 until his death 10 days ago. Prior to this, he served at a wide number of different parishes including those of Neutral Bay, Windsor, Concord, Gosford, Berala, Kingsgrove, Ashbury, Lakemba, Westmead, Mascot, Enfield and Blakehurst.
Born in County Kerry near the Dingle Peninsula, Fr Jim was one of 10 children, many of whom went on to serve God in nations across the world. Today Tom, Fr Jim's twin is the last survivor of this large Irish and deeply religious family.
Just as Fr Jim studied for the priesthood, some of his siblings also chose religious vocations. Among these were Fr John Stack who served as a missionary in Japan and England-based Mary Josephine who became a Dominican Sister.
Proud of his Irish heritage and devoted to his family, Fr Jim nevertheless volunteered for the Australian Mission in June 1954 - the same month Queen Elizabeth II was crowned in Westminster Abbey. 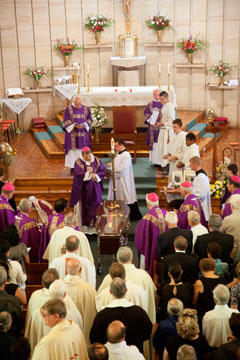 Bishop Anthony Fisher OP presided over the Funeral Mass for Irish born Father James Stack
"He told me the coronation of some English lass made transport to Australia hard to come by and he was 'forced' to travel first class," Bishop Anthony said and recounted how he had been a young altar boy at St Michael's Parish, Lane Cove when Fr Jim was briefly appointed curate to fellow Irishman, Monsignor Hughy Maguire.
"I disgraced myself by asking if the Monsignor spoke any English. In my Aussie-boy innocence I presumed he only spoke Latin. I hadn't guessed there was English under the Irish brogue!"
Fr Jim didn't recall Bishop Anthony as the youngster who hadn't understood the rich Irish accent: "So I clearly  didn't make much of an impression with the thurible," Bishop Anthony said.
Fr Jim had very much lived by County Kerry's longstanding Gaelic motto: "Comhar, Cabhair, Cairdeas" which translated means cooperation, help and friendship.
"His six decades of priestly ministry were marked by Comhair or cooperation, with God, our Blessed Mother, with bishops, priests and parishioners and of course with his golfing mates whom he joined 'religiously' every Monday at St Michael's course in North Sydney," Bishop Anthony said.
The late priest was also a model in terms of Cabhair or help, and was devoted to those entrusted to his care and had a passion for home visitation.

In terms of Cairdeas, or friendship, Fr Jim or Stacky as some of his close mates called him, may have been slightly shy and a little reserved but he had a gift for friendship and loved his parishioners and was loved by them, the Bishop said.
Bishop Anthony delivered the homily. Concelebrating the Funeral Mass were Bishop Terry Brady, Auxiliary Bishop for the Archdiocese of Sydney, Archdiocese of Sydney Bishops Emeritus, the Most Rev David Cremin and Most Rev Geoffrey Robinson; the Parramatta Diocese's Bishops Emeritus the Most Rev Kevin Manning  and Most Rev Bede Heather. Also concelebrating were Fr Martin O'Mahony and 49 priests from throughout the Sydney and Parramatta area.
The MC for the Funeral Mass was Fr Andrew Bass.
Following the Mass at the Holy Family Church in East Granville, Fr Jim was interred at Rookwood Catholic Cemetery, Lidcombe
SHARED FROM ARCHDIOCESE OF SYDNEY
Photographs by Alfred Boudib 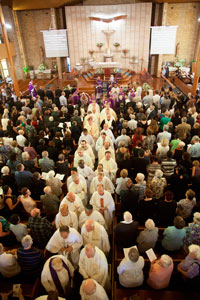 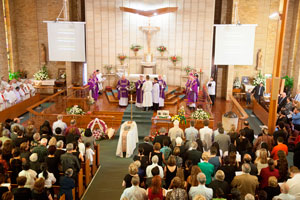