#PopeFrancis ""Begin again, yes, but begin again without having lost the ability to dream.." to #Earthquake Victims 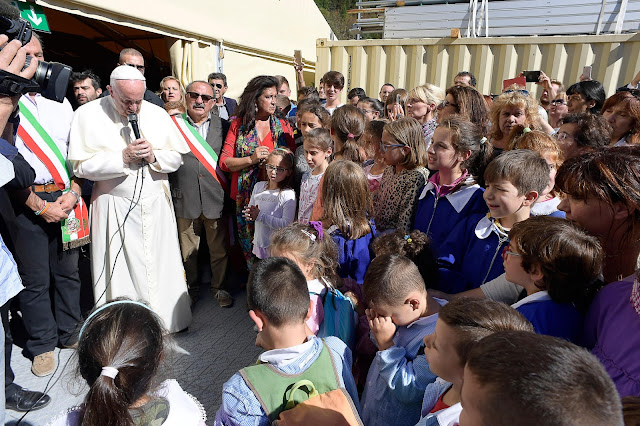 (Vatican Radio) Pope Francis met on Thursday with hundreds of Italians from the archdiocese of Spoleto-Norcia, devastated by a series of powerful earthquakes over the past six months. The central Italian town of Amatrice and surrounding areas were hit by a 6.3 magnitude quake in August which killed nearly 300 people. Other powerful quakes caused major damage in the same region on October 26th and 30th, with the latest tremors reported in Spoleto last Monday, January 2nd.

Around 800 people, led by their Bishop Renato Boccardo and local civic authorities, travelled to Rome for the audience in the Paul VI hall. Many of them had lost their houses, livelihoods and friends or family members in the largest earthquakes which reduced parts of many towns and villages to piles of rubble.
Regional reconstruction
Pope Francis sat and listened as a survivor and a local parish priest described the immense suffering of people, now seeking to rebuild their shattered communities. In his off-the-cuff response, the Pope said the worst thing to do in such circumstances was to offer a prepared sermon, but instead he reflected on the work of physical, mental and spiritual reconstruction that has been taking place throughout the region.
Healing hands
Pope Francis spoke of the wounds which have affected those who’ve lost their loved ones and the importance of crying together as they seek to heal the pain. He spoke too of the healing hands of doctors, nurses, firemen and all those who worked together to pull survivors from the rubble or offer help to those most in need.
Sharing and solidarity
Finally the Pope spoke of the spirit of solidarity and nearness which is vital for the reconstruction process. While everyone affected by the earthquakes will continue to bear scars, he said it’s important to find the courage to dream again.  Sharing and remaining close together, he said, makes us more courageous and more human as we face this daunting task.
Amatrice visit
The Pope’s words come three months after he made a surprise visit to Amatrice and two neighbouring towns to meet with survivors and relatives of victims. During the visit, he said he had not come to make speeches, but simply to be close to those suffering and to pray with all those affected by the earthquakes.