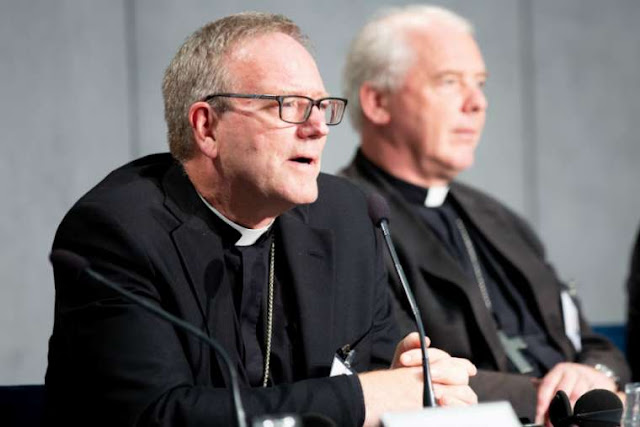 The General Assembly of the Synod of Bishops covered a large range of topics. These included the role of women, persecution and migration, reaching the “nones,” and spiritual mentorship.
By Russell Pollitt, SJ

Bishops Robert Barron from the United States and Everardus Johannes de Jong from the Netherlands told the briefing that the Synod has been a joyful experience in which there has been, so far, good open discussions. Bishop de Jong said that he felt the atmosphere was democratic. Bishop Barron said that if there was any doubt about who the protagonists of the Synod were, he assures people that it was most certainly the young people. He said that it was wonderful to see how the Church has listened. The bishop said that it was the catholicity of the Church on full display.
The Prefect of the Vatican Dicastery for Communications, Dr Paolo Ruffini, gave a synopsis of what was discussed in the assembly. These included the accompaniment of young people – not just for vocational discernment but all through life; Christians who are being persecuted (­he mentioned Iraq specifically and an intervention made by a young participant that got applause from the assembly); the role of women; clerical abuse; the failure of the Church in communication and the education of the faithful; migration; intergenerational dialogue; the possibility of new ways of living community life which may be for a limited time but can help young people find the accompaniment they seek; and how liturgy should not be reduced to an artifact.

Sr Mina Kwon from Korea spoke specifically about women in ministry and the need for them to be treated with the same respect as men. She said that religious women and lay people must take on the role of journeying with young people more and more. She said that sometimes, in ministry, religious women are excluded from pastoral care and are not give equal responsibility and decision-making power. Bishops Barron and de Jong said that although women cannot vote at the Synod, because it is a Synod of bishops, they both feel that women have been listened to very carefully and that what they say will find its way into the final document of the Synod. Sr Kwon said that young people are sensitive to inequality and exclusion; they want collaboration and equality.

Bishop Barron said that it helped listening to people speak about the situation in Iraq where Christians are being persecuted. He said that this helped the bishops get out of “first world preoccupations” and realise people are dying for their faith. Bishop de Jong said that hearing about Iraq forced him to ask the question “What am I doing in my diocese for the Christians of Iraq?” He said that the Synod is therefore also a place where questions of global solidarity can be explored.
Bishop de Jong spoke about migration, saying that often, in Europe, people complain about migrants entering their countries. He said that although western Europe does receive migrants, it puts things in perspective when you hear that single countries have received thousands more than the European collective. Dr Ruffini, in his remarks, said that was migration not only an issue between continents but also on continents; he specifically mentioned Africa

Reaching the “nones” and spiritual mentorship

Bishop Barron said that one important thing that struck him was that young people were really asking for spiritual mentorship. They want a church that is maternal and paternal. Many young people come from unstable family backgrounds and so they need to be mentored, nurtured and taught. Bishop Barron also said that close to his heart is a very challenging question: How do we reach the “nones” –  those whom the Church has no contact with, those who have no religious foundation. He said that the Church has to find ways of reaching them. This is a challenge but, he said, we also have new means, the world of social media, to help us achieve this.

Asked about whether or not Humanae vitae is being discussed by the Synod, Bishop Barron responded that there were no direct discussions but that it had certainly come up. He said that the canonisation of Pope Paul VI at this time was a prophetic move because if you read the document in our context today, it takes on a whole new meaning and shows that what he predicted was prophetic. He said that the assembly and small groups had spoken a lot about marriage and family life but that this was a moment to celebrate the prophetic quality of Humanae vitae.
FULL TEXT Release by Vatican News