Pope Francis at Vespers and Te Deum "Love of the Father and of the Son and of the Holy Spirit, to whom tonight Holy Mother Church elevates her hymn..." FULL TEXT + Video 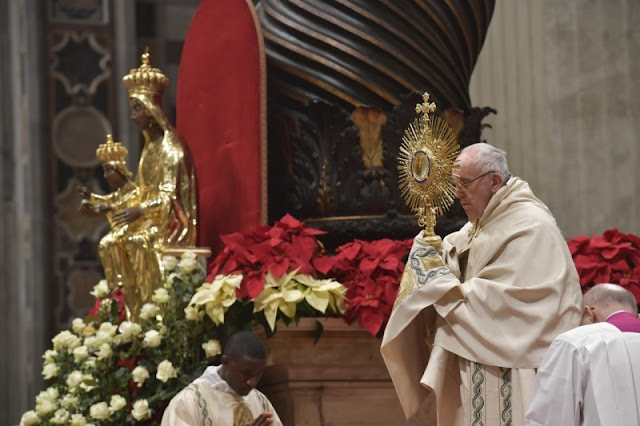 FIRST VESPERS OF THE SOLEMNITY OF MARY, MOTHER OF GOD
AND TE DEUM OF THANKS FOR THE YEAR TRANSFER


At the end of the year, the Word of God accompanies us with these two verses of the Apostle Paul (cf. Gal 4: 4-5). They are concise and dense expressions: a synthesis of the New Testament that gives meaning to a "critical" moment as it is always a passing of the year.

The first expression that strikes us is "fullness of time". It assumes a particular resonance in these final hours of a solar year, in which even more we feel the need for something that makes sense of the passage of time. Something or, better, someone. And this "someone" came, God sent him: he is "his Son", Jesus. We have recently celebrated his birth: he was born of a woman, the Virgin Mary; He was born under the Law, a Jewish child, subject to the Law of the Lord. How is it possible? How can this be the sign of the "fullness of time"? Of course, for the moment it is almost invisible and insignificant, but within a little more than thirty years, that Jesus will unleash an unprecedented force, which lasts and will last throughout history: the power of Love. It is love that gives fullness to everything, even to time; and Jesus is the "concentrate" of all the love of God in a human being.

St. Paul says clearly why the Son of God was born in time, what is the mission that the Father gave him to do: he was born "to redeem". This is the second word that strikes: to redeem, that is, to get out of a condition of slavery and return to the freedom, dignity and freedom of children. The slavery that the apostle has in mind is that of the "Law", understood as a set of precepts to be observed, a law that certainly educates man, is pedagogical, but does not free him from his condition as a sinner, indeed, for this to say "nail" him to this condition, preventing him from reaching his son's freedom.

God has sent his Only Son in the world to uproot the ancient slavery of sin from the heart of man and thus restore his dignity. In fact, from the human heart - as Jesus teaches in the Gospel (cf. Mk 7: 21-23) - all evil intentions, the iniquities that corrupt life and relationships come out.

And here we must stop, stop and reflect with pain and repentance because, even during this year that draws to a close, so many men and women have lived and live in conditions of slavery, unworthy of human beings.

Even in our city of Rome there are brothers and sisters who, for various reasons, are in this state. I think, in particular, to those who live without a home. They are more than ten thousand. In winter their situation is particularly harsh. They are all sons and daughters of God, but different forms of slavery, sometimes very complex, have led them to live on the edge of human dignity. Even Jesus was born in a similar condition, but not by chance, or by an accident: he wanted to be born this way, to manifest the love of God for the little ones and the poor, and thus throw into the world the seed of the Kingdom of God, Kingdom of justice, love and peace, where no one is a slave, but all are brothers, sons of the one Father.

The Church in Rome does not want to be indifferent to the slavery of our time, nor simply to observe and assist them, but wants to be within this reality, close to these people and these situations. Proximity, maternal.

I like to encourage this form of the motherhood of the Church as we celebrate the divine motherhood of the Virgin Mary. Contemplating this mystery, we recognize that God is "born of a woman" so that we could receive the fullness of our humanity, "adoption as children". From his lowering we have been relieved. Our greatness has come from his smallness. From his fragility, our strength. From his becoming a servant, our freedom.

What name to give to all this, if not Love? Love of the Father and of the Son and of the Holy Spirit, to whom tonight the Holy Mother Church elevates her hymn of praise and thanksgiving throughout the world.