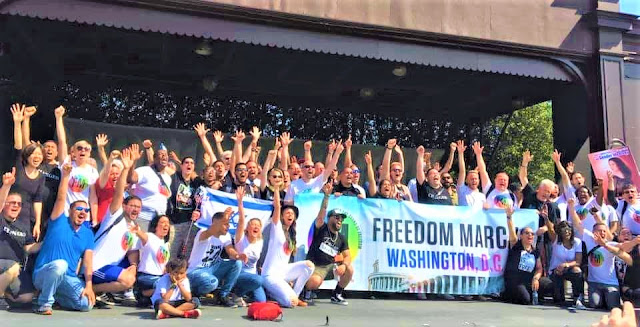 Hundreds of Ex-LGBT men and women came to share stories of transformation at 2nd Annual Freedom March in Washington, DC. Men and women who left gay and transgender lives march to the White House with the Freedom March on May 25, 2019. Men and women who once lived and identified as LGBT proclaimed how encountering Jesus transformed their lives for the second time in the nation's capital this weekend. The Freedom March, was founded by Jeffrey McCall, it involves a diverse group of Christians who have left the active practice of homosexuality and transgenderism.
They say the power of the Holy Spirit has set them free from sexual sin and wounds of all kinds. “I was transformed through the grace of Jesus and found that others have been as well. These marches are a way to ensure that others who have overcome are not feeling isolated and alone," McCall explained in a statement sent to The Christian Post. "There is an entire community of people that have made this transformation, and we are here to support them.”
The purpose of the march, according to McCall, is to connect those who have left the LGBT life, reach out to the LGBTQ community in each city, and equip local churches that are seeking to know how to minister to LGBT-identified persons.
McCall noted that the march functions as a platform a to both bring people together and build community, and allow those who have been changed by Jesus to share their stories. Luis Javier Ruiz, a March speaker, who is a survivor of the Pulse nightclub shooting in Orlando 2016, emphasized the centrality of knowing God. “I’ve always said it’s not about gay to straight. It’s about lost to saved,”  “Through the Freedom Marches, we want to spread messages of love and acceptance for people who have shed their LGBTQ identity and show others that we do exist. These marches are our platform to educate, encourage others and share in a community. We’ve had a great response from people, other community groups and churches.”
Vocalist and Freedom March worship leader Edward Byrd noted in a Tuesday email to CP that the greatest misunderstanding about those who have left the LGBT life behind is that they are self-loathing and are suppressing their sexual desires. "They think we are not happy, they think we are unfulfilled when in all actuality we are living our best lives. Not saying it’s always easy but the real joy, peace and freedom we have is nothing I ever known before," Byrd said.
Similar gatherings are planned for other areas in the USA in June.
The whole notion of "conversion therapy" is misleading, Byrd told CP, "because the majority of us has never experienced conversion therapy; our experiences were encounters with the Holy Spirit that changed our lives." For more Information see : https://www.freedomtomarch.com
Edited from Christian Post - CBN - Christian News

What beautiful testimonials! Every Christian Community should have this available to help their members that carry this cross find full freedom and true, lasting joy that comes only from Christ Jesus