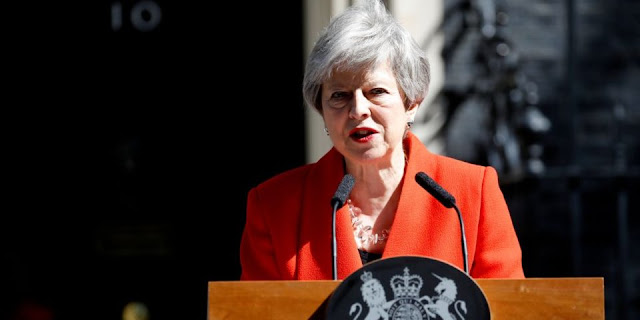 British Prime Minister Theresa May announced Friday in London that she will step down as the U.K. Conservative Party leader on June 7. A new Conservative leadership contest will begin on June 10, 2019. The U.K. is divided over the Brexit (Britain's split) from the European Union.

Prime Minister Theresa May said on Friday, May 24, 2019 that she'll step down on June 7, from calls in her governing Conservative Party.
"It is now clear to me that it is in the best interests of the country for a new prime minister to lead that effort," May said.

May was once a reluctant supporter of EU membership who won the leadership following the 2016 Brexit vote. She'll step down with her central pledges unfulfilled.

After announcing her resignation, May became emotional as she said it had been "the honour of my life" to serve "the country that I love" before returning to the prime minister's office.
Edited from CBC News