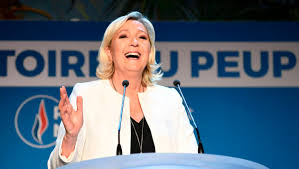 Marine Le Pen's far-right National Rally won a first-place finish in the European Parliamentary elections in France, beating President Emmanuel Macron's Renaissance list. National Rally, the renamed party of Le Pen's National Front party, won about 24 percent of the vote, compared with roughly 22.5 percent for Macron's centrist-liberal party. Conservatives were projected to gain as much as one-third of seats in the European Parliament.

Polls in Germany showed Chancellor Angela Merkel’s Christian Democrats came first, with fewer seats than last time.
Italy’s right League, headed by Deputy Prime Minister Matteo Salvini, also won the most votes with between 27-31 percent, as indicated by exit polls. This means that the EU must now give another direction to its policies regarding social issues, economy and migration.
The EU-wide was estimated at 51 percent, the largest in 20 years. There are over 200 million citizens within the 28-nation bloc who voted in this poll. The EU has a 751-seat assembly — and Green parties also rose in western Europe.
Posted by Jesus Caritas Est at 10:24 AM