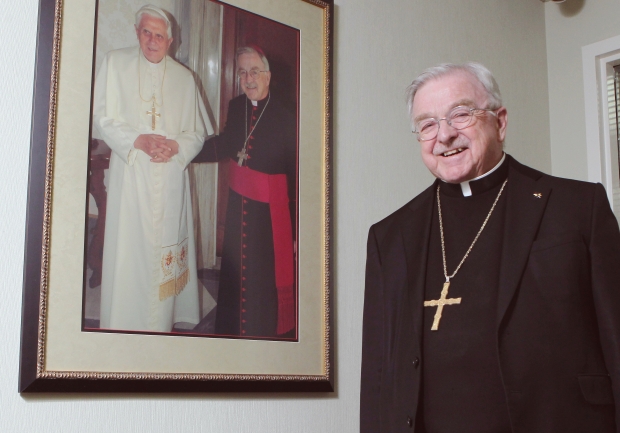 At the Canadian Chapter of the Fellowship of Catholic Scholars in Calgary Sept. 28-29, 2018, retired Bishop Henry gave an inspiring talk. Former Calgary Bishop Fred Henry was head of Catholics in southern Alberta, Canada. He retired in January 2017. At the conference the Bishop was given the Chesterton Award named after the famous convert to Catholicism.
He explained that the world is "divorced from God." He placed St. Teresa Benedicta of the Cross (Philosopher Edith Stein) as a great example for people to today to keep the faith in a post-Christian society. He highlighted her notion of the transformative power of prayer and spoke of framing your day in dedication to God.

“I don’t think as clergy we should be running away from this,” Bishop Henry said. “Right now it is very uncomfortable to be wearing a Roman collar … even when I’m travelling, it’s much simpler to go incognito..."

“But I’ve decided this is not what the Church ought to be doing. The Church ought to be saying, ‘Okay. I’ll go there. I’ll wear my collar. If you want to talk to me about sexual abuse by clergy, let’s talk about it.’ I’m not going to run from that sort of thing. You have to be engaged with the society.”


“We ought to be talking to the press. Tell them what we’re doing. If they don’t like it, well that’s okay. We shouldn’t run and hide. One of things we have to do is not be afraid of the media. Yeah, they’re going to be tough on you but that’s okay. They can ask the tough questions, but we’ve got the tough answers too.”

“We’re dealing with a culture that is making it very, very difficult to even be open to the truth, to hear voices of the truth or to even receive moral guidance,” Bishop Henry said.

“If you want to find out what’s going on in your culture today, just stay at home and watch a couple of hours of television. Rarely do you see God, faith, church, religion taken seriously by anyone.”


“I don’t think they will come home if you leave them alone,” Bishop Henry stated. “Some will find their way, but others will need some accompaniment, and they’re going to need invitations from some of the people who have substance and significance in life and in faith.”

Bishop Henry explained that the Church has to “consciously evangelize” young people.

“We go to what’s important to them, whether it’s a basketball game, a football game, to their classes to events that are intriguing to them. We have to find a way to connect.”
with information from Grandin Media and Fellowship of Catholic Scholars