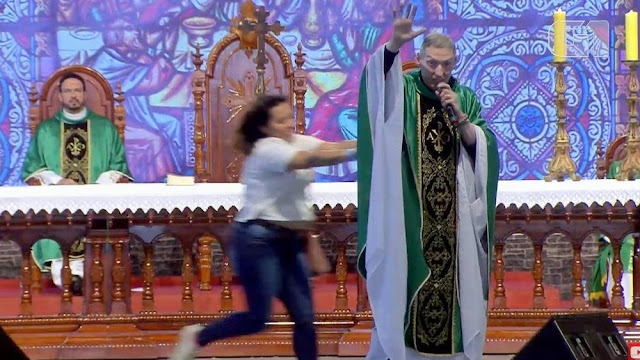 A woman pushed a priest, Fr. Marcelo Rossi, off a stage during a Mass Sunday in Brazil,  in front of 50,000 people.
A woman ran onstage and violently shoved a famous priest  in Cachoeira Paulista, near São Paulo, Brazil.
The 32-year-old woman ran toward Padre Marcelo Rossi, who is a popular preacher in the country, and shoved him off the stage.

The incident happened shortly before 3 p.m. on Sunday during the closing Mass of a youth retreat. Around 50,000 young Catholics were in attendance, the Brazilian news site Globo.com reported.


According to the police, the woman was one of the participants in the retreat. She was accompanied by a group who had traveled from Rio de Janeiro to attend. They reportedly told the police that she suffers from mental health problems.

The newspaper O Dia reported that the woman, who was at the event with her 3-year-old son, told reporters Monday that what happened was “between [Rossi] and I.”

The priest, who decided not to press charges, wasn’t seriously hurt.

A former physical education teacher, Rossi was ordained as a priest in 1994.
Edited from NY Daily