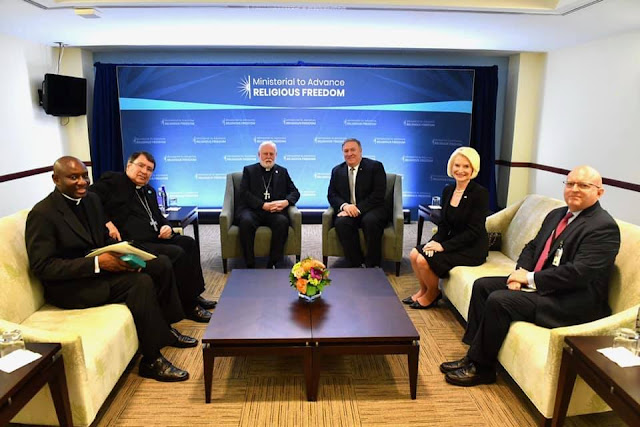 The second Ministerial to Advance Religious Freedom, from July 16 to 18, is the largest religious freedom event of its kind in the world. With more than 1,000 civil society and religious leaders, and more than 100 foreign delegations invited, this year’s gathering marks the first time a Secretary of State has convened back-to-back Ministerials on the same human rights issue. Last year’s inaugural Ministerial was the first-ever to focus solely on the unalienable human right of religious freedom. (https://www.state.gov/historic-second-annual-ministerial-to-advance-religious-freedom/)


The Religious Freedom and Interfaith Dialogue Exchange also kicked-off in Washington, D.C. to coincide with the Ministerial to Advance Religious Freedom. The three-week exchange program aims to create a network of spiritual and community leaders prepared to use media tools to promote moderation, build tolerance, and prevent conflict.


Officially opening the Ministerial gathering, U.S. Secretary of State Mike Pompeo welcomed more than 1,000 participants from 100 countries, saying that the event was designed to open a global discussion on guaranteeing religious freedom.
On July 16, we convened civil society, religious leaders and government officials to discuss the opportunities and challenges for promoting and defending religious freedom globally. Through a series of plenary sessions, participants discussed the necessary building blocks and emerging trends in advancing religious freedom, as well as how religious freedom, international development, and humanitarian aid can work together to advance mutual interests.
First Session The first session opened with welcoming remarks by Secretary Michael R. Pompeo and by Ambassador at Large for International Religious Freedom Sam Brownback. Following their remarks, came a presentation by three survivors of religious persecution (Pittsburgh, Jewish; Sri Lanka, Christian; and New Zealand, Muslim). This session concluded with a General Session on “Working Together to Advance Freedom of Religion or Belief.”Rabbi Myers' presentation was one of three that opened the ministerial, made up of a series of events held over several days at the Department of State. The main event was supplemented by side meetings on Capitol Hill, at universities and at nongovernmental organizations to discuss strategies related to protecting religious freedom.
According to Catholic News Service, Maronite Bishop Gregory J. Mansour of Brooklyn, New York, who chairs Catholic Relief Services' board of directors, was among a broad contingent of Catholic Church leaders attending the ministerial. He said the event allowed people to come together to learn from each other.
"You have evangelicals advocating for Uyghur Muslims. You have Muslims advocating for Christians in Iraq. You have Jews advocating for evangelicals," he said. "It's beautiful. It's what government ought to do: enable the people not to solve the problems of government, (but to) allow the people to connect with each other and say, 'Enough is enough. Religious freedom is a right.'"

Pompeo said, "We all agree that fighting so that each person is free to believe, free to assemble and to teach the tenets of his or her own faith is not optional. Indeed, it is a moral imperative that this be permitted.
"All people from every place on the globe must be permitted to practice their faith openly, in their homes, in their places of worship, in the public square, and believe what they want to believe," he added.
Sam Brownback, U.S. ambassador for international religious freedom, urged the attendees to start what he called religious freedom roundtables in their local communities. Such groups would bring together people of faith, nongovernmental organizations and political leaders to discuss how to expand understanding of religious freedom.

He described the ministerial as the largest such gathering ever held to address religious freedom.
Brownback said, "But the situation is grim. Although most of the world is religious, 80% of the world's population lives in a religiously restricted place. It's time to bring down these religious restrictions so that the iron curtain of religious persecution can come down for one and all and it comes down now," said Brownback, a one-time Methodist who became Catholic.
Image source: https://www.facebook.com/holysee.usembassy/
Edited from Catholic News Service and https://www.state.gov/day-1-2019-ministerial-to-advance-religious-freedom/
Posted by Jesus Caritas Est at 3:16 PM