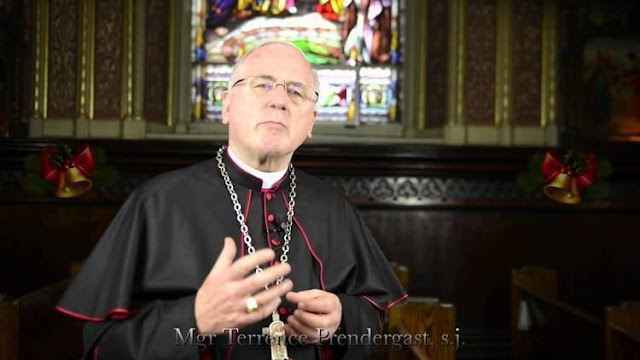 A  Satanic black mass planned in Ottawa Aug. 17 is hateful towards Catholics and risks desecrating what they hold most precious, says Ottawa’s archbishop.
The black mass, sponsored by the Satanic Temple in Canada, will take place at 10 p.m. at The Koven, a heavy metal bar near Notre Dame Cathedral and Basilica.
A protest occurred at 9:30pm on Saturday, 17 Aug 2019, starting at the entrance of Notre-Dame Cathedral-Basilica, 385 Sussex Ave. Ottawa.
SEE VIDEO -

********************************
Dear Reader,
Please Don't just Ignore this! Consider a small Donation to Catholic News World, a Mission in our 10th anniversary year, which brings the Gospel to over 200 Countries World Wide!
It's Easy Just Click the LINK below!
If you do not support Pro-Life - Christian media who will?
Every little bit helps - as a Donor you and your Family will be added to our Church Prayers - You can add your prayer intention on the Donation site "Donor Wall":
https://donorbox.org/support-catholic-news-world-we-need-


Nicholas Marc, organizer of the event told Global News he believes the event will “be the first organized public black mass in Canadian history.”

“To tamper with and mock the Mass — which is what this satanic ritual does — is hateful and will affect more than those who participate in it,” said Prendergast. “It will say loudly that the central belief of Christians should not be shown respect, as we would expect respect to be shown to the Jewish Torah, to the Muslim Koran and to the sacred objects of other faiths.

“Such a ritual sends the wrong message that we’re tolerant of what is in effect hate speech, which this has become by the widespread publicity being given to it,” the archbishop said.


“The Blessed Sacrament is given to those with faith in Christ’s presence in the Eucharistic host so that they may, by consuming it, achieve communion with Our Lord,” said the archbishop.
A recent Pew Research study that revealed 70 per cent of American Catholics believe the bread and wine used in Mass are only symbols of Jesus.

"...I am asking intercessory prayer groups to pray for those planning to take part in this [black mass] event so that they turn away from the path of darkness and turn instead towards the light of faith."


The archbishop warns that any dabbling in occult practices “has the potential of opening a spiritual doorway into the evil realm — giving demonic spirits permission, in other words — to infest our city with negative and evil energies.”


The archbishop said he will be offering a Mass of Reparation for the event on the morning of Aug. 17.

“We need to pray in reparation for the spiritual harm that is being planned, and that God would turn this blasphemous project into an occasion of grace,” he said, and he is encouraging pastors to alert the faithful in their parishes and to offer Mass, holy hours and prayers in reparation.
Edited from the Catholic Register
Below the Full Text Communique to Catholic Parishes in Ottawa 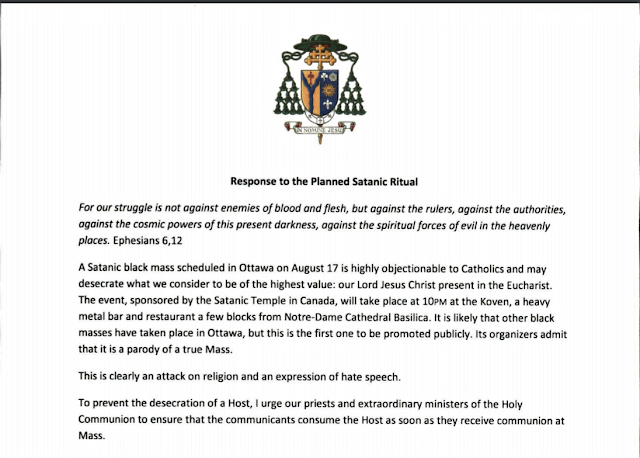 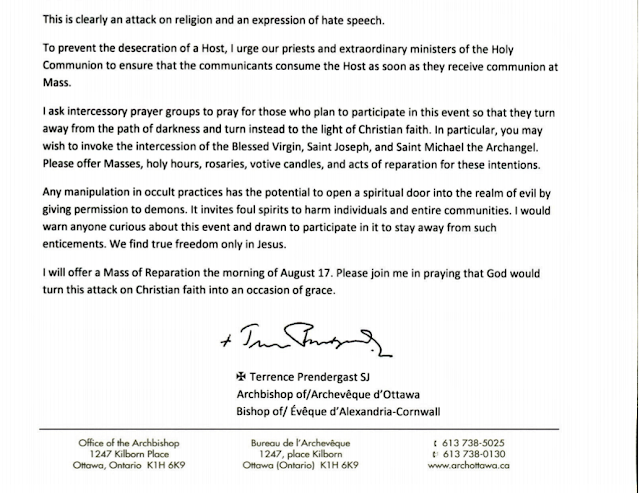 I will most definately pray not only on Saturday but also in these days leading up to this event and the days after. Pat

I will fast in reparation and also pray.

I will fast in reparation and also pray.

Praying daily the Holy Rosary, more especially from 15th of August, Feast of Assumption of Mother Mary. Fasting and abstinence on Fridays. Praying for St. Michael Archangel's protection for everyone. God Bless

Praying the 54 Day Novena for our countries in America, Aug.15 to Oct. 7th

I encourage all Christians to pray in your homes or gather in your churches to pray that somehow God in His mercy will thwart this whole event or the outcome that such an even could bring about. If you really treasure your faith please pray.
Margaret

I prayed a Rosary for priests last night for this intention.
Melanie

I will pray the Rosary and the act of reparation to the Sacred heart of Jesus as often as possible while in adoration and at home. i've dealt with demons and these poor deceived souls have no idea what they could open up....... Holy God, Holy mighty one, Holy immortal one, have mercy on us and on the whole world....