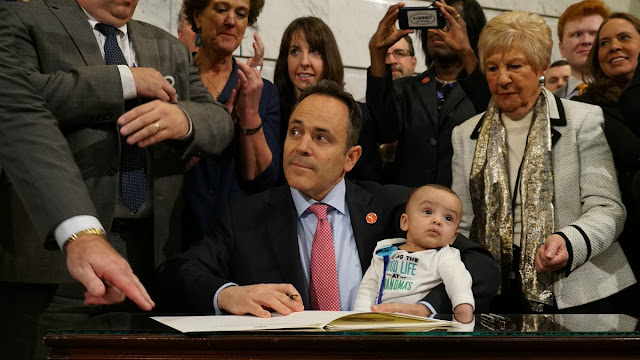 SB 9, the Heartbeat Bill, bans abortion after detection of a fetal heartbeat. SB 50, the Chemical Abortion Reporting Act, requires that doctors present information to patients about the reversal of medication abortions. HB 5, the Human Rights of the Unborn Child and Anti-Discrimination Act, bans abortion based on sex, race, or perceived disability. HB 148 states that if Roe v. Wade is overturned, abortions are banned in Kentucky.

“I am deeply grateful to be governor of a state that so overwhelmingly values the sanctity of human life,” said Gov. Bevin. “Kentucky is leading the charge in this vitally important fight for the heart and soul of our our great nation. We look forward to additional work with our strong legislative partners in building on this historic momentum, as we advance critical pro-life protections for the most vulnerable among us.”

“What many people don't know is that Gov. Bevin's legal team is defending duly enacted pro-life laws that aren't being defended in court by the current attorney general,” said Nelson. “Gov. Bevin is going the extra mile by committing his time, his energy and his staff, to uphold laws intended to protect the unborn. Gov. Bevin is truly a friend of life to future Kentuckians.”

Over the past three-and-a-half years, Gov. Bevin has worked with the General Assembly to enact several vital pieces of pro-life legislation, including: