Latest from the Amazon Synod "...beginning with Jesus, a language of love, of walking together, that bears witness to a simple, humble life." 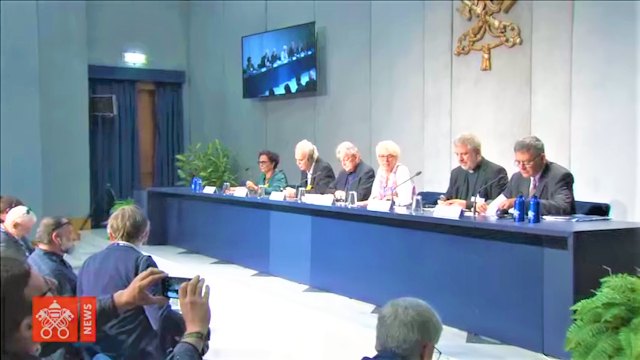 Amazon Synod Briefing: Defending and protecting indigenous peoples
At the press briefing following the morning’s General Congregation, the Prefect for the Dicastery for Communication reviews the various topics raised in the opening days of the Synod; while other speakers emphasized different aspects of the discussions.
By Christopher Wells

Among the topics highlighted by Dr Ruffini were the need of indigenous people for the sacraments, the importance of formation for pastoral ministers, the destruction caused by exploitative interests, and inculturation within the Church.

Diversity leads to discernment
Father Giacomo Costa, the Secretary of the Commission for Information, explained the synodal method both in prepared remarks and in response to questions in the press. Each participant is able to address the Synod, speaking from their own perspective and according to their own lights. This leads to discussion, rather than debate; and this diversity allows the Synod to exercise genuine discernment.

Cardinal Pedro Ricardo Barreto Jimeno, S.J.
In the first guest intervention on Tuesday, Jesuit Cardinal Pedro Barreto, Archbishop of Huancayo, Peru, and Vice President of REPAM, noted the “lights and shadows” that have marked the Church’s involvement in the Amazon region. The Church has for centuries been close to the sufferings of the Amazonian people; but she must also recognize the injustices of the past and apologize for them. He expressed a desire for a single language, beginning with Jesus, a language of love, of walking together, that bears witness to a simple, humble life.

Victoria Lucia Tauli-Corpuz
Victoria Lucia Tauli-Corpuz, the UN’s Special Rapporteur on the Rights of Indigenous Peoples, emphasized the violence native populations experience, and highlighted the challenges they face, including the criminalization of leaders, the exploitation of land, pollution, and even ethnicide. She said indigenous peoples must be protected by the international community, and stressed the importance of the Church using her moral and spiritual authority to support them.

Moema Maria Marques de Miranda
The final speaker, Moema Maria Marques de Miranda, a lay Franciscan, struck an apocalyptic note, saying we are the first generation to experience the possibility of the end of the world. Pope Francis, she said, also feels the urgency. It is only in recent decades that we have recognized the interconnectedness of the world; we can and should learn from indigenous people how to live in harmony with creation. And she noted that it is not surprising that is precisely those voices from the “ends of the earth” – people like Pope Francis and Greta Thunberg, who are showing us where we truly stand in this moment in history.

Question and Answer
After the main presentations, the panel fielded questions from journalists.

In response to a question about the Church’s involvement in political questions in the Amazon, Marques de Miranda spoke about the connection between economy and ecology, saying that we must understand how the world works in order to maintain it as a habitable home. Cardinal Barreto added that this is a question that must be placed in a global context, and noted Pope Francis’ insistence that some modern, technocratic economic models are no longer adequate.

Rights and duties
One journalist asked about aspects of indigenous culture that are at odds with contemporary understandings of human rights, referring specifically to infanticide, which he said was practiced by numerous Amazonian tribes. Tauli-Corpuz acknowledged that some indigenous practices are “strange”, and noted an ongoing debate about the balance between respecting indigenous rights, and the duty of indigenous peoples to conform their practices to international law, especially regarding women and children. Indigenous peoples, she said, must correct and rectify some of their customs.

Cardinal Barreto said he had never heard of the practice of infanticide among indigenous peoples, and said people making such claims must back them up with proof. Nonetheless, while recognizing the value of ancestral wisdom, he acknowledged that Jesus asks us to defend life, saying that a culture of life is essential to the Gospel.

The importance of listening
In response to a final question regarding the question of diversity of opinion within the Synod, Fr Costa said there were certainly differences of opinion among participants. However, the format of the Synod ensured that individuals could express their own thoughts without directly engaging in controversy with others. He emphasized again the importance of listening, so that all opinions can be heard.

Unlike a parliament, he said, the Synod will not make decisions, but will offer suggestions and proposals for Pope Francis, who will ultimately give guidance on the path forward. Full Text Source: VaticanNews.va