Pope Francis tests Negative for the Coronavirus but has a Cold, so he will not Travel to Lenten Spiritual Exercises 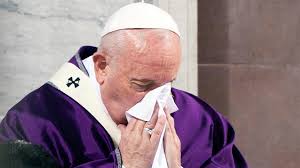 According to RomeReports, Pope Francis, who has been suffering from a cold for nearly a week now has tested negative for the coronavirus. The Vatican  said the pope was feeling “slightly unwell.” Even with his cold, Pope Francis offered Holy Mass greeted people during the few meetings he had last week. At age 83 , for the first time, the pope did not attend his Lenten spiritual exercises out of Rome. He is, rather, participating from his home at Casa Santa Marta, at the Vatican. Hopefully, to make a full recovery and resume  his normal schedule next week. In Italy, there are over 2,000 infected, 52 have died from the disease, and 149 have been cured.
Posted by Jesus Caritas Est at 12:41 PM