Way of the Cross from St. Peter's in the Vatican with Pope Francis and Full Prayers on Good Friday - Full Video 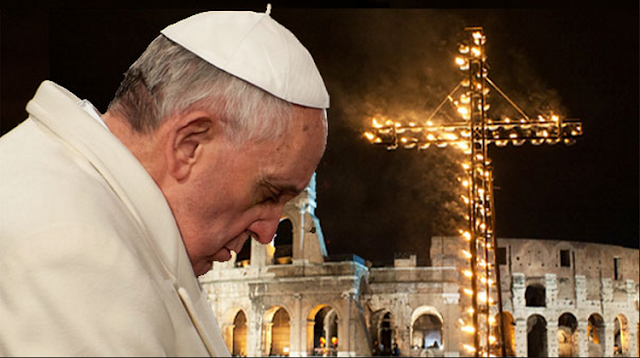 Each meditation represents a life and a story. Each one is associated with the fourteen stations of this year’s Via Crucis, or Way of the Cross. The meditations have been written by people whose lives are in some way connected to the “Due Palazzi” correctional facility in Padua, Northern Italy. They were collected by the prison chaplain, Fr. Marco Pozza, and journalist, Tatiana Mario.

Lockdown to prevent the spread of coronavirus in Italy began on 8 March. Prison riots around the country followed when prisoners were told they could no longer receive visitors. Two days after the riots, Pope Francis offered Mass for prisoners: “I would like to pray for those who are in prison”, he said. “They are suffering, and we must be near to them in prayer, asking that the Lord might help them and console them in this difficult moment”.

First Station: Jesus is condemned to death
The author of the first meditation is serving a life sentence. “My crucifixion began as a child”, he says, explaining that his stutter made him an outcast. He says he feels more like Barabbas than Jesus. Sometimes he weeps. “After 29 years in prison I have not yet lost the ability to cry, to feel ashamed of my past, and the evil I have done”. In the “non-life” he lived previously, he “always sought something that was life”, he says. Today, strange as it may seem, “prison has become my salvation”, he adds.

If, for some, I am still Barabbas, that does not make me angry: I know in my heart that the Innocent One, condemned like me, came to find me in prison to teach me about life.

Second Station: Jesus takes up his Cross
The parents of a girl who was brutally murdered recount how theirs “was a life of sacrifices based on work and family”. They used to ask themselves: “Why has this evil overwhelmed us?”. They could find no peace. "At the moment when despair seems to take over, the Lord comes to meet us in different ways”, they say. “He gives us the grace to love each other like newlyweds, supporting each other, even with difficulty". Today, they continue to open their doors to all those in need.

The commandment to perform acts of charity to us is a kind of salvation: we do not want to surrender to evil. God’s love is truly capable of renewing life because, before us, his Son Jesus underwent human suffering so as to experience true compassion.

Third Station: Jesus falls for the first time
“It was the first time I fell. But for me that fall was death”. The third meditation is written by a prisoner. He did not know about the evil growing inside him, he says. After a difficult life, one evening “like an avalanche…. anger killed my kindness… I took someone’s life”. After considering committing suicide in prison, he found people who gave him back the faith he had lost, he says.

My first fall was failing to realize that goodness exists in this world. My second, the murder, was really its consequence, for I was already dead inside.

Fourth Station: Jesus meets his Mother
The author of the fourth meditation is a mother whose son is in prison. She says she was not tempted “even for a second” to abandon her son in the face of his sentence. That day, she says, “the whole family went to prison with him”. She describes people “pointing fingers” like knives, and wounds that “grow with every passing day”. She has entrusted her only son to Mary and says she feels her closeness. “I confide my fears to Mary alone, because she herself felt them on her way to Calvary”.

In her heart she knew that her Son would not escape human evil, yet she did not abandon Him. She stood there sharing in His suffering, keeping Him company by her presence. I think of Jesus looking up, seeing those eyes so full of love, and not feeling alone. I would like to do the same.

Fifth Station: Simon of Cyrene helps Jesus carry the Cross
The author of the fifth meditation is a prisoner. He says he hopes to bring joy to someone someday. “Everyone knows a Simon of Cyrene”, he explains. It is the nickname of those who help others carry their cross up their own Mount Calvary. He describes his cellmate as another Simon of Cyrene: someone who lived on a bench, without a home or possessions.

His only wealth was a box of candies. He has a sweet tooth, but he insisted that I bring it to my wife the first time she visited me: she burst into tears at that unexpected and thoughtful gesture.

Sixth Station: Veronica wipes the face of Jesus
The catechist and author of the sixth meditation wipes away many tears, just like Veronica. “They flood uncontrollably from hearts that are broken”, he says. In the dark reality of prison, he describes meeting desperate souls, trying to understand why evil exists.  Finding an answer is hard, he says.  He asks how Jesus would wipe away their tears if He were in that position. How would Jesus ease the anguish of these men, he asks. So, he tries to do what he believes Jesus would do.

In the same way that Christ looks at our own weaknesses and limitations with eyes full of love. Everyone, including those in prison, has an opportunity each day to become a new person, thanks to Christ’s look which does not judge, but gives life and hope.

Seventh Station: Jesus falls for the second time
The prisoner responsible for the seventh meditation says he often walked past prisons, thinking to himself he would never “end up in there”. Then he was convicted of drug dealing, and found himself in what he calls the “cemetery of the living dead”. Now, he says, he did not know what he was doing.

I am trying to rebuild my life with the help of God. I owe it to my parents... I owe it above all to myself: the idea that evil can continue to guide my life is intolerable. This is what has become my way of the cross.

Eighth Station: Jesus meets the women of Jerusalem
The author of the eighth meditation describes how her whole life was shattered when her father was sentenced to life in prison. She has been travelling around Italy for twenty-eight years, following her father as he is moved from prison to prison. Deprived of her father’s love, and his presence on her wedding day, she has had to cope with her mother’s depression as well.

It’s true: there are parents who, out of love, learn to wait for their children to grow up. In my own case, for love, I wait for my Dad’s return. For people like us, hope is a duty.

It is true that my life was shattered into a thousand pieces, but the wonderful thing is that those pieces can still be put together. It is not easy, but it is the only thing that still makes sense here.

Tenth Station: Jesus is stripped of his garments
The author of the tenth meditation is a teacher. Just as Jesus was stripped of His garments, so he has seen many of his students “stripped of all dignity… and respect for themselves and others” in prison. They are helpless, frustrated by their weakness, often unable to understand the wrong they have done. Yet, at times they are like newborn babies who can still be taught, he says.

Even though I love this job, I sometimes struggle to find the strength to carry on. In so sensitive a service, we need to feel that we are not abandoned, in order to be able to support the many lives entrusted to us, lives that each day run the risk of ruin.

Eleventh Station: Jesus is nailed to the Cross
The author of the eleventh meditation is a priest who was falsely accused, and later acquitted. His own “Way of the Cross” lasted ten years, he says, during which he had to face suspicion, accusations and insults. Fortunately, he also encountered his own versions of Simon of Cyrene who helped him carry the weight of his cross. “Together with me, many of them prayed for the young man who accused me”, he says.

The day on which I was fully acquitted, I found myself happier than I had been ten years before: I experienced first-hand God working in my life. Hanging on the cross, I discovered the meaning of my priesthood.

Twelfth Station: Jesus dies on the Cross
The author of the twelfth meditation is a judge. No magistrate, he says, can “crucify a man… to the sentence he is serving”. True justice is only possible through mercy, he adds. Mercy helps you find the goodness that is never completely extinguished, despite all the wrongs committed. To do this, one must learn how to “recognize the person hidden behind the crime committed”, he says.

In this process, it sometimes becomes possible to glimpse a horizon that can instill hope in that person and once his sentence has been served, to return to society and hope that people will welcome him back after having rejected him. For all of us, even those convicted of a crime, are children of the same human family.

Thirteenth Station: Jesus is taken down from the Cross
“Prisoners have always been my teachers”, writes the religious Brother, author of the thirteenth meditation. He has volunteered in prisons for sixty years. “We Christians often delude ourselves that we are better than others”, he says. In His life, Christ willingly chose to stand on the side of the least. “Passing by one cell after another, I see the death that lives within”, he says. But Christ tells him to keep going, to take them in His arms again. So he stops, and listens.

This is the only way I know to accept that person, and avert my gaze from the mistake he made. Only in this way will he be able to trust and regain the strength to surrender to God’s goodness, and see himself differently.

Fourteenth Station: Jesus is laid in the tomb
A corrections officer has written the concluding meditation for this year’s Way of the Cross. Every day he witnesses first-hand the suffering of those who live in prison. “A good person can become cruel, and a bad person can become better”, he says. It depends on that person. But prison changes you, he adds. Personally, he is committed to giving another chance to those who have chosen what is wrong.

I work hard to keep hope alive in people left to themselves, frightened at the thought of one day leaving and possibly being rejected yet again by society. In prison, I remind them that, with God, no sin will ever have the last word.
Full Text Source: Vatican News.va