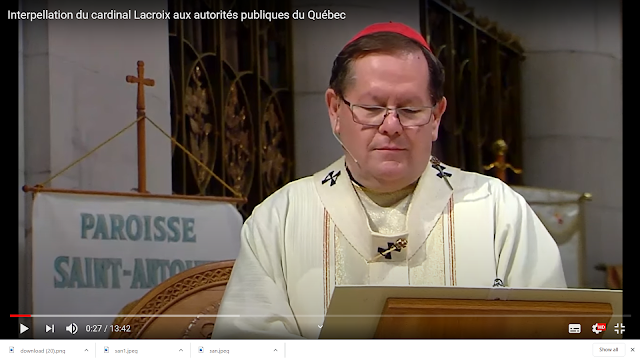 New restrictions on places of worship

Reaction of Cardinal Lacroix and religious leaders of Quebec

The Quebec government having announced the limitation of the number of people in places of worship to 50 and even 25 people, the religious leaders of Quebec react unanimously. They demand a reclassification of places of worship in the category of auditoriums, cinemas and theaters.

At a press briefing Monday, Cardinal Gérald Cyprien Lacroix spoke for the bishops of Quebec, to comment on the press release issued the same day by the Inter-religious consultation table, which brings together representatives of the Catholic Church, the Anglican Church, Evangelical Churches, different Jewish traditions, different mosques, and the Canadian Center for Ecumenism.

It reads: “In many ways, the sanitary measures put in place in places of worship exceed government requirements. With the result that to date, to our knowledge, no outbreak has taken place in a place of worship. In these difficult times, religious leaders are doing everything necessary to put in place measures that ensure the protection of the health of their faithful. "

Cardinal Lacroix adds: "We have worked hard since June with the teams who have taken hospitality very seriously, bringing them up to standard in order to respect all the instructions. (…) Our proofs are made. We are doing more than what is asked of us, because we really want to avoid any participation in this pandemic. "

Now, "let us continue to welcome people," asks the Archbishop. Faith communities perform an essential service, providing concrete support to the population in this difficult period, especially the most vulnerable. The leader mentions in particular the celebration of the funeral, ensuring that there is no problem to manage inside churches.

The Interreligious Table's press release demonstrates that “gatherings in places of worship are in truth comparable to those held in cinemas and theaters, according to the government's own criteria. (…) We are not asking for a privilege. We present ourselves as partners and simply wish to be considered fairly by the government. "

In this regard, the statement reiterates the need for a more effective channel of communication between the government and religious leaders, to promote a good understanding of the reality of faith communities. Cardinal Lacroix reiterates his request: "We hope to be heard, and finally, after so many attempts, to have the possibility of entering into direct communication with the authorities of public health and the government. We want to continue to be united, partners, but for that, we have to talk to each other. "


*****FULL TEXT Statement:
Reconfining places of worship to 25 or 50 people

Montreal, September 21, 2020 - Since the start of the Covid-19 crisis in Quebec, leaders of religious groups in Quebec have worked closely with public health authorities. In many ways, the sanitary measures put in place in places of worship exceed government requirements. With the result that to date, to our knowledge, no outbreak has taken place in a place of worship. In these difficult times, religious leaders are doing everything necessary to put in place measures that ensure the protection of the health of their faithful.

In these troubled times, thousands of Quebeckers find comfort in the practice of their religion and a source of resilience that benefits the entire population. Whatever one may think of it, spirituality and the search for meaning have an essential place in human life. This service to the community seems necessary to us in order to help our faithful get through this health crisis.

Religious leaders have spared no effort in trying to engage in frank and open dialogue with government authorities in a spirit of collaboration. Letters that have not even received an acknowledgment, phone calls and emails left unanswered are countless. While in neighboring provinces, government authorities are in direct and constant contact with religious leaders, there is no such communication in Quebec. This situation is disappointing and unacceptable.

The Minister of Health announced on Sunday afternoon a series of stricter measures aimed at protecting the population from Covid-19. However, the lack of dialogue that we denounce means that the government once again places places of worship and bars in the same category. In its press release, the Ministry of Health speaks in the same breath of “activities in places of worship and in rooms where the sale or service of alcoholic beverages for consumption on site is permitted”. On its face, this amalgamation is unwarranted and false.

Obviously, gatherings in places of worship are in truth comparable to those held in cinemas and theaters, according to the government's very criteria: "The places where people sit, relatively still and talk. little or no, for example theaters, cinemas, theaters and audiovisual recording studios, can continue to accommodate a maximum of 250 people. "[1] The government seemed to us to have already recognized this similarity in order number 2020-059 of the Minister of Health and Social Services dated August 26, 2020, which allows people seated in places of worship to remove mask or face cover when they are stationary and sit 1.5 meters apart, such as in theaters and cinemas. In addition, the protocols for the safe reopening of places of worship established jointly with the public health authorities ensure that the communities gathered in the places of worship take care to limit the speaking sessions of assemblies as much as possible.

Therefore, we demand that government authorities immediately reclassify places of worship as performance halls, cinemas and theaters, which would allow us to continue to accommodate up to 250 people in our venues. worship instead of being limited to 25 or 50. We also ask that a frank and open channel of communication be established between us and government authorities. We are not asking for a privilege. We present ourselves as partners and simply wish to be considered fairly by the government.

We, religious leaders who are members of the Table interreligieuse du Québec, would like to remind you that we aspire to an open dialogue with government authorities. We sincerely hope that this request will be sufficient to assert our rights and receive from the government the recognition that is due to citizens who practice their religion with due respect for sanitary rules.

On behalf of the members of the Interreligious Table [2],

+ Christian Rodembourg
Bishop of Saint-Hyacinthe
President of the Assembly of Catholic Bishops of Quebec
Source: https://evequescatholiques.quebec/fr/news-item/les-leaders-religieux-du-quebec-denoncent-une-injustice