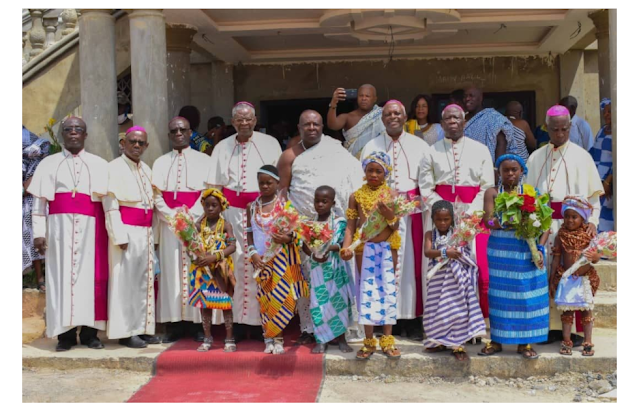 Accra (Agenzia Fides) - Recent political disturbances in the Volta Region of Ghana have caused many to wonder if Ghana is truly a peaceful nation. The Volta Region which was once part of Togo in the colonial era has been experiencing unrest as some of its inhabitants are calling for independence from the Republic of Ghana and calling for a new nation called the Westen Togoland.

It is in this light that the Catholic Bishops' Conference is calling on all citizens to work towards a united and stable Ghana. "We wish to express our grave concerns regarding the recent 'secessionist' disturbances in parts of the Volta Region and wish to appeal to those who are perpetrating these acts of vandalism and destruction of property to refrain from them".

The twenty Archbishops and Bishops of Ghana also called on those politicians who refer to some Ghanaians as ‘foreigners’ to desist from such unguarded comments. "All divisive comments must cease if we intend to make any progress in our attempt to resolve the current threat being posed by the 'secessionists'."

The Bishops urged the Nana Akufo-Addo government to do all within its means to find a lasting solution to this emerging problem and hoped that all state institutions carrying out investigations will accelerate the pace of the legal process needed to deal with this growing national crisis.

The German Empire established the Togoland protectorate in 1884. Under German administration, the protectorate was regarded as a model colony.

During the First World War in 1914, Britain and France invaded the protectorate. After the German defeat and the signing of the Treaty of Versailles, the western part of Togoland became a British mandate, British Togoland. After the Second World War, British Togoland became a United Nations Trust Territory under British administration until they voted in a plebiscite in 1957 to become part of what is now Ghana. (A.A) (L.M) (FULL TEXT Source: Agenzia Fides,17/11/2020) Image Source: Google Images Screenshot of the Bishops of Ghana