What is Advent? 3 Things to Know and SHARE Plus FREE Resources - Happy Advent! 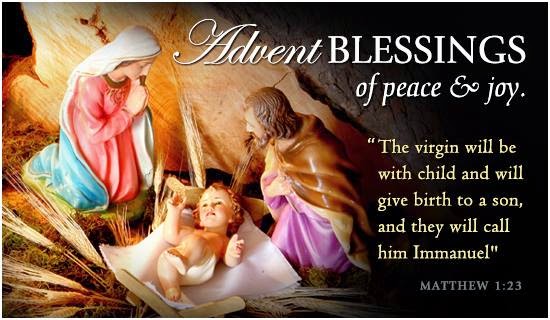 1. ADVENT comes from the Latin ad-venio, meaning to come to.
2. Advent is a period beginning with the Sunday nearest to the feast of St. Andrew the Apostle (30 November) and involving four Sundays. The first Sunday may be as early as 27 November, and then Advent has twenty-eight days, or as late as 3 December, giving the season only twenty-one days.
3. With Advent the ecclesiastical year begins in the Western churches. During this time the faithful are admonished:
* to prepare themselves worthily to celebrate the anniversary of the Lord's coming into the world as the incarnate God of love,
* thus to make their souls fitting abodes for the Redeemer coming in Holy Communion and through grace,
* and thereby to make themselves ready for His final coming as judge, at death and at the end of the world.
FOR NOVENA PRAYERS AND MORE LIKE US ON FACEBOOK NOW https://www.facebook.com/catholicnewsworld

In the Massthe Gloria in excelsis is not said. The Alleluia, however, is retained. During this time the solemnization of matrimony Benediction) cannot take place; which prohibition binds to the feast of Epiphany inclusively. The celebrant and sacred ministers use violet vestments.   An exception is made for the third Sunday (Gaudete Sunday), on which the vestments may be rose-coloured.   Flowers and relics of Saints are not to be placed on the altars during the Office and Masses of this time, except on the third Sunday.
FREE ADVENT Calendar to Print from the US Bishops - https://www.usccb.org/resources/Final_Advent_Calendar_2020_1.pdf
Historical origin
The preparation for the feast of the Nativity of Our Lord was
not held before the feast itself existed, and of this we find
no evidence before the end of the fourth century, when,
according to Duchesne [Christian Worship (London, 1904), 260],
it was celebrated throughout the whole Church,
Several synods had made laws about fasting to be observed during this time.
Beginning the Church's liturgical year, Advent
(from, "ad-venire" in Latin or "to come to")
is the season encompassing the four Sundays
(and weekdays) leading up to the
celebration of Christmas.
The Advent season is a time of preparation that directs
our hearts and minds to
Christ’s second coming at the end of time and
also to the anniversary of the Lord’s
birth on Christmas. The final days of Advent,
from December 17 to December 24,
focus particularly on our preparation for the
celebrations of the Nativity of our Lord (Christmas).
Advent devotions including the Advent wreath, remind
us of the meaning of the season.
Our Advent calendar above can help you fully enter in to
the season with daily activity and
prayer suggestions to prepare you spiritually
for the birth of Jesus Christ.
More Advent
resources are listed in Links below.
Blessing of an Advent Wreath