Palm or Passion Sunday Explained in 3 Minutes - What You Need to Know - Jesus died for You! #PalmSunday VIDEO 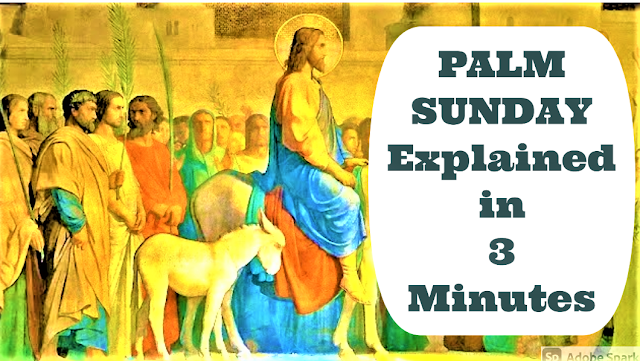 PALM SUNDAY OR PASSION SUNDAY is celebrated on the Sunday before Easter. It commemorates Jesus' entry into Jerusalem on a donkey. The donkey was a symbol of peace. The biblical account can be found in the Gospels:
Now all this was done that it might be fulfilled which was spoken by the prophet, saying: Tell ye the daughter of Sion: Behold thy king cometh to thee, meek, and sitting upon an ass, and a colt the foal of her that is used to the yoke. And the disciples going, did as Jesus commanded them. And they brought the ass and the colt, and laid their garments upon them, and made him sit thereon. And a very great multitude spread their garments in the way: and others cut boughs from the trees, and strewed them in the way: And the multitudes that went before and that followed, cried, saying: Hosanna to the son of David: Blessed is he that cometh in the name of the Lord: Hosanna in the highest. And when he was come into Jerusalem, the whole city was moved, saying: Who is this? (Matt. 21: 4-10)
Palm leaves are blessed and given out to the congregation at Church. The liturgy begins with a blessing and procession of palms, but prime attention is given to a lengthy reading of the Passion, with parts taken by the priest, lectors, and congregation. The palms are often taken home by the members of the congregation to serve as sacramentals (sacred signs of the sacraments), and some of them are burned the following year to serve as the ashes for Ash Wednesday, which begins Lent. This is a Solemnity in the Church Calendar and the liturgical colors are red for this day. (Image Share : Google)
How to fold a Palm into a Cross:
1. Take a palm frond about 1/2 inch wide and 13 inches and hold upright
2. Fold the top down, away from you, and the bottom up, away from you, to form the shaft of a cross of desired length
3. Turn the end down and twist around to the right and across the front of the shaft to make a crossbar in proportion to the length.
4. Fold the end around behind the shaft.
5. Bring the end from behind, under the centre. Fold from the bottom right to the top left and under again from the bottom left to the top right.
6. Fasten the end through the back loops to lock.