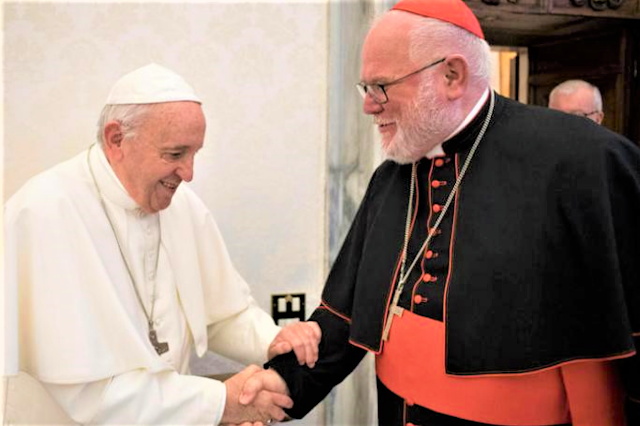 Cardinal Reinhard Marx, age 67, is a German cardinal of the Catholic Church and the Archbishop of Munich and Freising. Pope Benedict XVI elevated Marx as a Cardinal in 2010. He offered his resignation as archbishop to Pope Francis on the 4th of June 2021.

Personal declaration regarding the letter dated May 21, 2021

I have asked the Holy Father on May 21, 2021 to accept my resignation as Archbishop of Munich and Freising and handed over the decision about my further service to him. He has now informed me that this letter may be published and that I should keep performing my service as bishop until his decision is made. In the past months, I have repeatedly thought about my resignation, introspected and tried to make the right decision in prayer and in the spiritual dialogue by „discerning the spirits“.

The events and debates of the past weeks, however, only play a subordinate role in this context. Over the past years, I have repeatedly been asked questions which I have always on my mind and which constantly challenge me. An American journalist asked me during a conversation about the sexual abuse crisis in the Church and the events of the year 2010: „Eminence, did this change your faith?“ And I replied: „Yes, it did!“ Afterwards it became clearer to me what I had said. The crisis not only concerns a required improvement of the administration – although it does concern it – but it is even more about the question of a renewed form of the Church and a new way to live and proclaim faith today. And I asked myself: What does this mean for me personally?

I was asked the other question inter alia during the press conference of the German Bishops’ Conference after the presentation of the MHG survey in September 2018: whether one of the bishops had taken responsibility and offered his resignation in light of the presentation of the survey. I replied to this question with: „No.” And also in this case I have increasingly felt afterwards that this question cannot just be set aside.

The accounting for the past encouraged and demanded in the MHG survey and later in the agreement of the German Bishops‘ Conference with the Independent Commissioner for Child Sexual Abuse Issues of the federal government (Unabhängiger Beauftragter für Fragen des sexuellen Kindesmissbrauchs, UBSKM) are en route in various bishoprics. Inspections of the files and research regarding specific mistakes and failures of the past, including the question of the respective responsibilities, are inevitable components of dealing with the past but they do not constitute the entire renewal.

The inspections and expert opinions so far have made it clear that it is also about „systemic“ causes and structural hazards which must be dealt with. Both must be looked at together. Therefore, I have strongly supported the project of „The Synodal Path“ which takes up the aspects oft he MHG survey and other identified aspects and deepens them theologically.

This path must be continued! Although the above questions remain. I have been a priest for 42 years and a bishop for almost 25 years, nearly 20 years of which I have been the ordinary of large dioceses, and of course I will face possible mistakes and failures in individual cases to be investigated in detail which were committed during my terms of office and which will then have to be reviewed and evaluated pursuant to objective criteria. It is, however, not sufficient in my view to restrict the willingness to assume responsibility above all to mistakes concerning Canon Law or administration and failures resulting from a review of the files.

As a bishop, I have an “institutional responsibility” for the acts of the Church in its entirety as well as for its institutional problems and failures in the past. And have I not helped to foster negative forms of clericalism by my own behaviour and the false concerns about the Church’s reputation? Above all, however: Has the focus on those affeted by sexual abuse truly been the central leitmotif at all times? Not before 2002 and more consequently since 2010, we have truly assumed this orientation and many things have gotten under way, but we are nowhere near our objectives.

The establishment of the foundation „Spes et Salus“, which focuses on the concerns and needs of those affected by sexual abuse, also has to be seen in this context. I am concerned about the fact that a trend has become apparent over the past months to exclude the systemic causes and hazards or, if we point a finger on it, the fundamental theological questions, and to reduce the process of dealing with the past to an improvement of administrative processes. It was an exclusively personal decision to hand in my resignation and ask for acceptance of the same. With my resignation, I would like to make clear that I am willing to personally bear responsibility not only for any mistakes I might have made but for the Church as an institution which I have helped to shape and mould over the past decades. Recently, it has been said: “Coming to terms with the past must hurt.“ This decision is not easy for me. I like being a priest and bishop and hope that I can continue to work for the Church in the future. My service for this Church and the people does not end. However, to support a new beginning which is necessary, I would like to bear my share in the responsibility for past events. I believe that the „dead end“ we are facing at the moment can become a “turning point”. This is my paschal hope and I will continue praying and working for it to happen.

21st May 2021 Holy Father, Without doubt, these are times of crisis for the Church in Germany. There are, of course, many reasons for this situation – also beyond Germany in the whole world – and I believe it is not necessary to state them in detail here. However, this crisis has also been caused by our own failure, by our own guilt.

This has become clearer and clearer to me looking at the Catholic Church as a whole, not only today but also in the past decades. My impression is that we are at a „dead end“ which, and this is my paschal hope, also has the potential of becoming a „turning point“. Of course, the „paschal faith“ also applies to our pastoral care as bishops: For whoever whishes to save his life will lose it, but whoever loses his life will find it!

Since last year, I have thought about this more thorougly and have asked myself what this means for me personally and I have decided – encouraged by the Easter period – to ask you to accept my resignation as Archbishop of Munich and Freising. In essence, it is important to me to share the responsibility for the catastrophe of the sexual abuse by Church officials over the past decades.

The investigations and reports of the last ten years have consistently shown that there have been many personal failures and administrative mistakes but also institutional or „systemic“ failure. The recent debates have shown that some members of the Church refuse to believe that there is a shared responsibility in this respect and that the Church as an institution is hence also to be blamed for what has happened and therefore disapprove of discussing reforms and renewal in the context of the sexual abuse crisis. I firmly have a different opinion. Both aspects have to be considered: mistakes for which you are personally responsible and the institutional failure which requires changes and a reform of the Church.

A turning point out of this crisis is, in my opinion, only possible if we take a “synodal path”, a path which actually enables a “discernment of spirits” as you have repeatedly emphasised and reiterated in your letter to the Church in Germany. I have been a priest for forty-two years and a bishop for almost twenty-five years, twenty years thereof I was an ordinary in large bishoprics. It is painful for me to witness the severe damage to the bishops‘ reputation in the ecclesiastical and secular perception which may even be at its lowest. To assume responsibility, it is therefore not enough in my opinion to react only and exclusively if the files provide proof of the mistakes and failures of individuals.

We as bishops have to make clear that we also represent the institution of the Church as a whole. And it is also not right to simply link these problems largely on past times and former Church officials thereby „burying“ what happened. I feel that through remaining silent, neglecting to act and over-focussing on the reputation of the Church I have made myself personally guilty and responsible. Only after 2002 and even more since 2010, those affected by sexual abuse have been brought to the fore more consequently and this change of perspective has not yet been completed.

Overlooking and disregarding the victims was certainly our greatest fault of the past. In the aftermath of the MHG survey commissioned by the German Bishops‘ Conference I stated in the Cathedral of Munich that we have failed. But who is this “We“? In fact, I also belong to this circle. And this means that I must also draw personal consequences from this. This is becoming increasingly clear to me.

I believe one possibility to express this willingness to take over responsibility is my resignation. In doing so, I may be able to send a personal signal for a new beginning, for a new awakening of the Church, not only in Germany. I would like to show that not the ministry is in the foreground but the mission of the Gospel. This too is an element of the pastoral care. I therefore strongly request you to accept this resignation. I continue to enjoy being a priest and a bishop of this Church and I will keep committing myself in pastoral matters, whereever you deem it reasonable and useful. In the next years of my service, I would like to increasingly dedicate myself to pastoral care and support an ecclesiastical renewal of the Church which you also call for incessantly.

Archbishop of Munich and Freising

The courage and determination of Cardinal Marx is exemplary. It would greatly benefit the Catholic Church to think as this man does.