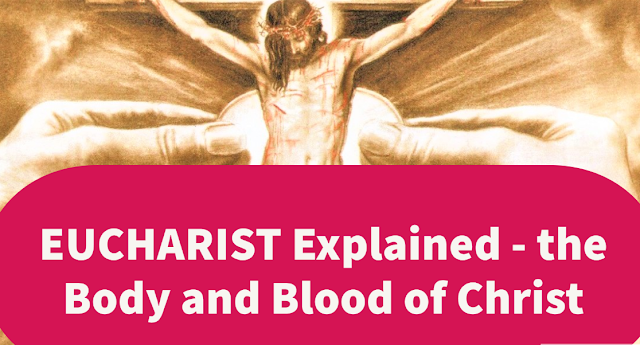 The Eucharist is celebrated everyday at Holy Mass in Churches throughout the world. There are two big feast days
that celebrate the Eucharist, they are Holy Thursday, just before Easter, which remembers the Last Supper, before the Crucifixion. Then, there is the Solemnity of Corpus Christi. It is celebrated on the Thursday after Trinity Sunday but is assigned to the nearest Sunday in many countries. In 2021, it was assigned to Sunday, June 6th in
several countries but occurred on June 3rd.
The feast is also known as the Solemnity of the Body and Blood of Christ. The feast of Corpus Christi (Latin for Body of Christ) was initiated by Saint Thomas Aquinas, Doctor of the Church, to Pope Urban IV,  to establish a feast focused solely on the Holy Eucharist, as being the Body and Blood, Soul and Divinity of Jesus Christ. (1264AD) At the end of Holy Mass, there is often a procession of the Blessed Sacrament, which is contained in a monstrance. 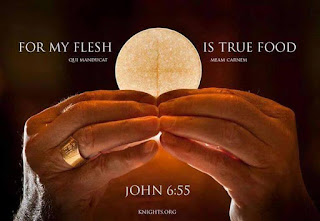 The procession is followed by the Benediction of the Blessed Sacrament.
1.What is this Sacrament called?
The word EUCHARIST comes from the Greek noun εὐχαριστία (eucharistia), meaning thanksgiving. In the New Testament of the Bible we find Jesus establishing the Eucharist. At Holy Mass (Church Service) Catholics receive Jesus under the appearance of bread from the Priest; this is the Body and Blood of Christ.  We believe that this transubstantiation happens because Jesus expained it in the Bible.
Bible basis: Now as they were eating, Jesus took bread, and after blessing it broke it and gave it to the disciples, and said, “Take, eat; this is my body. (Matt. 26:26)
CCC 1328 The inexhaustible richness of this sacrament is expressed in the different names we give it. Each name evokes certain aspects of it. It is called: Eucharist, because it is an action of thanksgiving to God. The Greek words eucharistein and eulogein recall the Jewish blessings that proclaim - especially during a meal - God's works: creation, redemption, and sanctification.
CCC1330 We speak of the Most Blessed Sacrament because it is the Sacrament of sacraments. The Eucharistic species reserved in the tabernacle are designated by this same name.
2. Why is it called the Lord's Supper?
CCC1329 The Lord's Supper, because of its connection with the supper which the Lord took with his disciples on the eve of his Passion and because it anticipates the wedding feast of the Lamb in the heavenly Jerusalem.The Breaking of Bread, because Jesus used this rite, part of a Jewish meat when as master of the table he blessed and distributed the bread,above all at the Last Supper.It is by this action that his disciples will recognize him after his Resurrection,and it is this expression that the first Christians will use to designate their Eucharistic assemblies;by doing so they signified that all who eat the one broken bread, Christ, enter into communion with him and form but one body in him.
Bible basis:
Jesus said to them, “Amen, amen, I say to you, unless you eat the flesh of the Son of Man and drink his blood, you do not have life within you. Whoever eats my flesh and drinks my blood has eternal life, and I will raise him on the last day. For my flesh is true food, and my blood is true drink. Whoever eats my flesh and drinks my blood remains in me and I in him.(John 6:53-56)
3. Why is it called Holy Communion?
The term "Communion" comes from Latin communio ("sharing in common"), translated from the Greek κοινωνία (koinōnía) coming from the New Testament:
Bible basis:
The cup of blessing which we bless, is it not the communion of the blood of Christ? The bread which we break, is it not the communion of the body of Christ? (1 Cor. 10:16)
CCC 1331 Holy Communion, because by this sacrament we unite ourselves to Christ, who makes us sharers in his Body and Blood to form a single body.We also call it: the holy things (ta hagia; sancta)- the first meaning of the phrase "communion of saints" in the Apostles' Creed - the bread of angels, bread from heaven, medicine of immortality,viaticum. . . .
4.What is the Breaking of Bread?
The phrase (Greek: του κλασαι αρτον) is found in the New Testament
Bible Basis:.
The disciples of Jesus recounted what had taken place along the way, and how they had come to recognize him in the breaking of bread. (Luke 24:35)
They devoted themselves to the teaching of the apostles and to the communal life, to the breaking of bread and to the prayers. (Acts 2:42)
Every day they devoted themselves to meeting together in the temple area and to breaking bread in their homes. (Acts 2:42)
5. Why is it called the Holy Mass?
The Eucharist is also called "Holy Sacrifice of the Mass", where the term "Mass" might be derived from the use of unleavened bread (in Hebrew: matzah).  Latin word missa (dismissal), is used at the end of Mass in Latin: Ite, missa est ("Go; it is the dismissal"). "Misa" came to mean a 'mission', since the congregation are sent out to serve Christ.
Bible Basis:
Then he took the bread, said the blessing, broke it, and gave it to them, saying, “This is my body, which will be given for you; do this in memory of me.” (Luke 22:19)
CCC 1332 Holy Mass (Missa), because the liturgy in which the mystery of salvation is accomplished concludes with the sending forth (missio) of the faithful, so that they may fulfill God's will in their daily lives.
CCC means Catechism of the Catholic Church